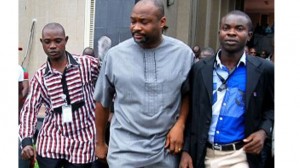 Honourable Chidi Lloyd, the Leader of the Rivers State House of Assembly, has been arrested by the Rivers State Police Command over the alleged murders of Mr. Kingsley Ejeuo, a politician and a police sergeant Urang Obadiah.

The Police in a statement by spokesman, Ahmad Mohammad accused Lloyd of running over the police officer with his armoured SUV before ramming into the VW Passat vehicle which Ejeuo was driving killing both men instantly along Emohua on the East-West road on December 30, 2013,

The police statement which announced the arrest of Lloyd as he tried to “escape” in a private jet chartered by Rivers State Governor Rotimi Amaechi, said it initially thought the incident was an accident but further investigation revealed otherwise.

But the Governor’s Chief Press Secretary, David Iyofor has described the police account linking Amaechi to Lloyd’s purported escape bid as “preposterous and outrageous, and a blatant lie.”

“… Does it make any sense to escape from Port Harcourt to Abuja? Is Abuja not within the Federal Republic of Nigeria?” he told a local newspaper.

Lloyd had earlier been detained by the police in July last year and charged with the attempted murder of another assembly, Hon. Michael Chinda, during the fracas in the House of Assembly.

The Commissioner of Police in Rivers State, Mr. Mbu J. Mbu and Governor Amaechi alongside his supporters have been at loggerheads since the battle for the control of power in the state between Amaechi and the Presidency erupted.

The full text of the police statement reads: “The Rivers State Police Command has arrested Hon. Chidi Llyod of the Rivers State House of Assembly for murder of Police Sgt. Urang Obadiah and Mr. Kingsley Ejeuo, his kinsman and arch political opponent.

“He was arrested on his way to join His Excellency Governor Amaechi Rotimi in his private jet at the Air Force base to escape justice.

“Hon. Chidi Lloyd while pursuing his political opponent, Ejeuo, hit and knocked down Sgt. Rang Obadiah, in his (Obadiah’s) effort to stop him (Lloyd).

“He rammed over the Passat car in which Ejeuo was driving, killing him on the spot.

“The Police initially thought it was a mere accident which ought to have been a manslaughter, not until Lloyd relocated from the initial private hospital where he was being treated, after ACP Alay Garb by the directives of CP Mbu J. Mbu visited him that the Police began to raise suspicion and went into further investigations on the purported accident.

“Conscious of what he did, Chidi Lloyd relocated to another hospital. It was later that facts emerged that Chidi Lloyd drove a bullet proof vehicle while pursuing his political opponent late Mr. Kingsley Ejeuo and he knocked down the police Sergeant who died on the spot and moved ahead and smashed Ejeuo’s Passat car, killing him also on the spot.

“The late Mr. Kingsley Ejeuo who hailed from the same place with Lloyd was a member of PDP.

“While being guarded by four police in his hospital bed, he sneaked out through the hospital’s back door in three tinted bullet proof jeeps and escaped.”