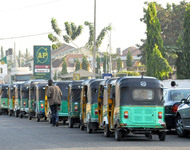 Many commuters in Minna, Niger, were on Thursday stranded following the enforcement of the ban on commercial motorcycle operators, popularly known as Okada.

The News Agency of Nigeria (NAN) reports that most people in the city had a difficult time accessing the buses and the tricycles provided by the state government to cushion the effects of the ban.

The buses and tricycles charged between N30 and N50 per drop, which most of the residents said were affordable.

Malam Haruna Shehu, a business man, complained that the vehicles provided by the state government were not adequate.

“Even though the buses and Keke NAPEP are cheap, since morning I have sighted just a few buses provided by the government to ease the situation.

“I don’t think that is enough to cater for the teeming population that depends on Okada,” he said.

Another resident, Reng Ali, said with the new development, he now had to trek long distance from his house to get a Keke NAPEP to convey him to work every day.

“The problem with the ban is that these buses and Keke NAPEP don’t ply every route like the Okada people used to do.

“I will now have to start trekking long distances from my house to be able to get a Keke like I did today,” he said.

Another commuter, Kehinde Abdulsalam, said:“I did not have it easy today, but I cannot go on complaining because it would not change anything, sometimes we have to make sacrifices.”

NAN observed that security personnel were out on major roads in the state capital arresting defaulters of the ban, which came into effect on Jan. 2.

The government said the ban was aimed at checking the high rate of road accidents and crimes involving commercial motorcyclists.

It said that buses and tricycles had been provided to ease the effects of the ban.