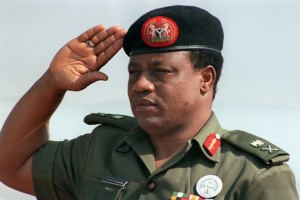 It was late Chief Akinloye the Chairman of NPN that let Nigerians know that there were always two parties in Nigeria: NPN and the Military. Mind you, we’ve always had political thugs. They eventually graduated to godfathers like Adedibu as the strongman in Ibadan. Eventually, the religious fanatics were courted as political movers in the North just as the political thugs in the South. In short we now have the two political parties – the Terrorist and the Military.

There is no way you can become a President in Nigeria without belonging to either a Military or the Terrorist party. The “bloody” civilians have been knocked cold out of power since the sixties. Disguised by handovers to civilian governments in the name of democracy, they must seek the backing of Terrorist or Military party. Many “militricians” boldly claimed it takes a military leader to govern, until Terrorist Party challenged them with opposite and guerrilla force.

Do not dismay by victims in Bornu, Zakia Biam, Odi, Jos, Kano and Lagos shoot on sight orders. They’ve all presented claims to World Human Right Organization. Any government that rules by the barrel of the gun is led by armed robber. The terrorists of yesterday are the rulers of today in many areas of the world. Before Menachem Begin insurgents against British in Israel, there was American war against the British. President Arafat was not the last terrorist either.

There are a millions other ways a country could have been better managed. We lost our bearing to military government out of desperation thinking the situation could not be worse. Military operation is short sighted looking for quick subdued foes, not usually long term economic or structural building. It is easier for them to destroy, as their specialties, than to build for future generation. We call most of the Armed Forces members – “kill an’ go”. We are stuck in Nigeria.

There is a conspiracy of silence in Nigeria for fear of “heating up the polity”. All the present and previous leaders get together to nip any disagreement in the bud. They do not want to “stir the hornet’s nest” disrupting status quo. It is a deadly conspiracy for the masses. Nigeria as it is today breeds international contempt and disrespect and Diaspora Africans bury their heads in shame because the only promising regional power expected in the sixties went into a slumber.

No matter what we think about Obasanjo as a bona fide member of the oppressor class, there is no head of state in Nigeria that he has not criticized, even at the risk of death sentence. He has no constituency; even in his ethnic base. But he is not for sacrifice. In spite of all his faults, Nigeria needs many more Obasanjo from the ruling class, not less of him. You may not want to be related to a mad man, but from their mouths come the bitter and fearless truth, uncensored.

So when the North warned Obasanjo that Jonathan was a terrorist, they proved it when Henry Okah of MEND said so; when he appointed another terrorist arm supplier, Gen. Azizi, as head of the Nigerian Army. But those calling Jonathan terrorist are well known terrorists that raped and maimed their own countrymen and women. We see the consequences of their illegalities and the atrocities of their actions everyday especially in poor deprived children of next generation.

Obasanjo is a stubborn goat: he nor dey hia word. That is why those outside his ethnic base called him the “most detribalized Nigerian”. If he had listened to Soyinka, the South could have been united against the North. If he had listened to the North, Igbo would not have been given key positions and Ijaw man would not have been the President. Rebels must be left in the dog house until they repent, many claimed. OBJ defied that rule and appointed vanquish and victor.

If only the Yoruba soldiers at Ore had allowed Ojukwu’s Yoruba, Banjo to get to Lagos, Nigeria could have been a paradise now? So many rebels could have been shot and forgotten like Banjo. One point we could all agree on is that oil money could have been spent differently by patriots like Macauley, Zik, Awo, Sardauna, Ernest Nkoli and Aminu Kano that could have groomed the next generation better. Compared to Military or Terrorist party, that lives for the day.

The leadership the world demands from Nigeria is confidence with a unique economy that can boast Naira as local currency instead of dollar the poor lack. Our children will be honored and not ashamed to be called Africans, no matter where. The world may be relieved of our poverty.

If we cannot lead at home, why think of Diaspora? Since the youths are afraid to revolt like their fathers did as radical students, the next solution is leadership from one of these many ethnic minorities that must be backed by the South-south and North-central to revamped Labor Party anew. We know too much of others but ignorant of one another.

The Westerners claiming Egypt need Ogun deliverance and Easterners that claim Jews need to be re-baptized into Igbo-Chukwu. The Hausa could have been liberated to join hands with their brothers and sisters across the Niger. Indeed, Hausa, Igbo and Yoruba could have gained more as precursor of man in Africa if they can only stop contradicting scientific proof, in archeology.

We call on heaven that only helps those that help themselves. Start from pride in African religions that hear prayers in our languages, since God is everywhere. Unless you speak Latin or Arabic with names like the writer’s, foreign God will not hear our prayers. He does not speak any African language. Blame economy on man, not on God.

Nigeria @ 100: Challenges & Opportunities Before Her Youths

Edward Wabundani: The Irrelevance Of G5 Governors In APC