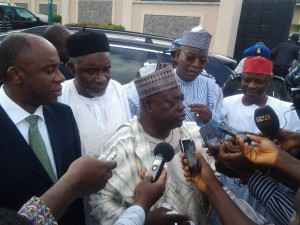 Until recently, I happen to be one among Bola Tinubu’s fans. My liking for him then stems from his superintendence over the defunct Action Congress’s victory in Lagos in 1999 over the ruling PDP, and the successes recorded by ACN in 5 out of the 6 South Western and Edo States between 2007 and 2011 general elections. As a matter of principle and by nature, the fighting spirit of any bold leader whose transparent achievements are attained at cross purposes with majority rule gladdens my heart.

While Tinubu’s conquests over the PDP lasted as stated above, he reneged from his usual positive thinking to activism, propelled by enmity and envy of the ruling party’s fortunes. He openly criticized the leadership of PDP at all tiers of government, branding its elected officials including the C in C and State governors as thieves milking the country dry to its knees. He even went a step further to accuse them of entrenching and institutionalizing both electoral and economic corruption in the nation’s polity.

But swiftly after INEC registered the All Progressives Congress (APC) as a political party, a couple of months ago, Bola Tinubu changed the tone of his song. He and his co-travellers in the new party swallowed their pride and started hobnobbing with some of these governors who jumped ship and rebelled against the party that imposed them on the people. What informed Tinubu’s friendship with the governors he initially accused of corruption is best known to him. Popularly referred to as G-7, now G.5, the governors fell out of favour with the mainstream PDP based on their individual and collective interests. At this point, the autocracy in Tinubu began to evolve. Knowing fully well that most of these rebel governors have outlived their usefulness in their various states but still want to cling onto power, he (Tinubu) in the wake of his wooing the governors pledged to appease them by surrendering the structure of the party to them and their renegade supporters.

But as an interested stakeholder, Tinubu should stop playing to the gallery and do the right thing. Contrary to Bola Tinubu’s claim that the structure of APC has in anyway been handed to the rebel governors, the agreement signed between the governors and APC states that “the incoming governors will enjoy some privileges formerly enjoyed by the eleven governors of the founding parties. In the special cases of Adamawa and Kano States however, there is a proviso that the defection of the governors in these two states will be treated differently on account of the fact that the entry of these governors into APC adds little value to the party.”

The allegation that the APC leader and a handful of his ilk at the national level have sold out the party to these governors seem to be a factor that will diminish the fortunes of the new party in the 2015 general elections in the affected states. This is evident from unresolved issues tabled at a recent stakeholders meeting chaired by Tinubu in Abuja recently. It was reportedly stated that the Leader of the party is disposed to handing over the structure of APC to Murtala Nyako in Adamawas state at the detriment of the founding fathers of the party in the state. That meeting ended in a deadlock. As one of Tinubu’s former fans, this recent act of his has put me off anything to do with his policies.

It should be noted that Alexander the Great was a brilliant General and a gallant warrior in his time. His victories are legendary. He was a fighter but a bad administrator. He died a few years after the conquest of Persia. Tinubu and his co-travellers should therefore learn a lesson from that and tread cautiously before APC crumbles like pack of cards in Adamawa in particular.

The fact remains that politics in Adamawa State has always been a peculiar one right from independence. It has always been the brewing centre and melting pot of the collision of democracy. Whatever anybody would say, the strict insistence on democratic norms and not the usual money bags and or political heavy weight gave the defunct Action Congress of Nigeria (ACN) her acceptability and the feat it attained in the 2012 general elections in Adamawa State. This singular factor and the goodwill enjoyed by the governorship candidate was the secret of the winning streak it enjoyed from the electorate, despite the glaring anti-party posture of the then national leadership of the ACN demonstrated against the Adamawa people and the governorship candidate.

While we are not against Gov Nyako’s defection to the APC, he cannot be the face of the party in the state. What value will he add when his sponsored candidate had just of recent lost a State Assembly seat bye-election from his ancestral LGA? What we rather demand is for the APC leadership to call the governor to order before he plunges the party into the type of crisis in the state chapter of PDP of which he was the principal architect. The pit he dug for others in PDP has eventually consumed him to the extent that his former party is currently celebrating his exit. For sure, the lion can never change it’s spots.

In the final analysis, it behooves the Interim National Executive of the APC to impress on its leadership to have a rethink on the way and manner it manages the temporary victory of ushering in the 5 rebel governors to its fold vis-à-vis the collective interests of its founding fathers. No doubt, the national leadership has a duty to enlarge and expand the party.