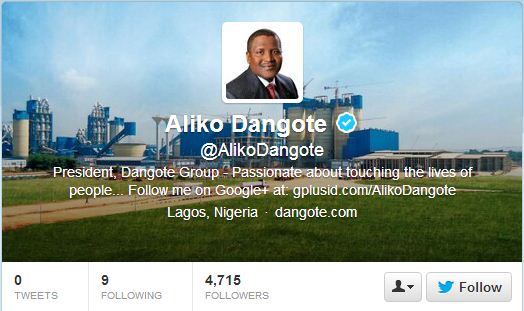 Africa’s richest man, Alhaji Aliko Dangote, has launched an official Twitter verified account with the handle @AlikoDangote. But no official date yet as to when he will start Tweeting.

The Twitter account currently doesn’t have any tweets. It follows only 9 other accounts in the likes of Bill Gates ?, Jack Welch , the Author, Commentator, and Executive Chairman of the Jack Welch Management Institute, a business school offering an Executive MBA at Strayer University, and  Jeff Immelt ?, Chairman & CEO of @GeneralElectric and in less than an hour after the account was launched, it had over 5,000 thousand followers.

Dangote was named as Africa’s richest man, by Forbes Magazine, with an estimated worth of $20.8 billion.

Big Data 2.0: The Next Generation Of Big Data