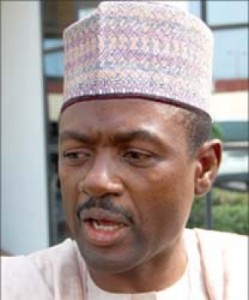 The Minister of Information and Supervising Minister of Defence, Labaran Maku, has said the poor power supply Nigerians are witnessing, despite the power sector reforms of the Goodluck Jonathan’s administration, should be blamed on the criminal activities of some citizens.

Speaking on Sunrise Daily on Monday, Mr Maku defended President Goolduck Jonathan on his August 29, 2012 promise to deliver the “dividends of democracy by 2013.” He said that the administration had been battling with inherited issues of terrorism which had consumed a lot of the State’s funds. “We have been dealing with this for the past three years,” he said.

He was quick to add that despite the war against insecurity, Nigeria’s economy is growing faster than the economies of South Africa and Egypt. He credited this to the President’s study of management of economy.

“Even as we are fighting this war, because the President studied management of the economy, today we are talking about an economy that is growing faster than South Africa and Egypt,” Maku said.

He stressed that resources which would have been channeled into other sectors including education, industry and agriculture had been wasted on the fight against terrorism and political wars.”

“Inspite of this, you have an economy that this year IMF said the Nigerian economy grew by 7.2 per cent, even above government’s own projections 6.9 per cent.”

He continued by saying that: “In 2012, inflation was about 12.2 per cent but today inflation has come down to 8 per cent. It has not been so for the past 20 years.” He also said that the President has built 10 power plants in the last 3 years which no other president has achieved in the nation’s history.

“Jonathan has undertaken a comprehensive (complete) replacement of power transmission infrastructure.” The privatisation exercise is the first stage in the reform process in the power sector,” he explained.

Although the Minister of Power, Chinedu Nebo, recently revealed that the new owners of the power plants are having financial problems, Mr Maku considered the set-back to be “a period of adjustment.”

He expressed optimism that the policy reforms would yield results if Nigerians were responsible enough to desist from criminal acts including cutting down power lines “to cause darkness in some parts of the country.”

“These are citizen’s problems and not problems because of the failure of government,” he added.

“This President (Jonathan) has returned the economy to the path of growth and development, our financial system is better. We inherited a crashed capital market but today the capital market has recovered by 71 percent between 2012 and now.

“In terms of the overall value of shares, we have gone over 11 trillion Naira. This growth makes it clear that the President is making the economy better than anyone,” he stressed.