Unless The PDP Embraces Rigging, It Can Never Win Elections In Nigeria - Amaechi 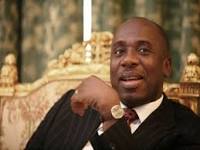 The Rivers State Governor, Mr. Rotimi Amaechi, has said ahead of the forth coming 2015 general elections in Nigeria. The party which he was elected for a second term mandate, the Peoples Democratic Party can never win elections in the country.

Amaechi now a memeber of the All Progressives Congress (APC) made the remarks in Port Harcourt on Friday night.

The Governor said with the exodus of PDP members to the All Progressives Congress, the ruling party was on its way out of power.

“Watch out before March if we don’t have the numbers that we are looking for. So, you can’t call us opposition anymore because there are three arms of government and only two are electable; the executive and legislature.

“Yes, the PDP has the national executive, but we are inching close to having the legislature. Who then would be called the opposition if we have it?”

Amaechi, went on to state the reasons he left the PDP for the APC….

Advertisement
Related Topics:APCPDPRotimi Amaechi
Up Next