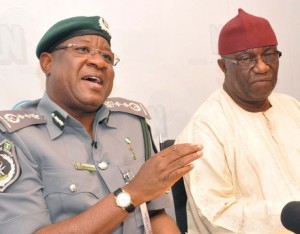 Speaking at the exercise in Ibadan , the Customs Area Commander, Mr Richard Oteri, said the products were seized by the command’s crack team on Saturday at Orile Ilugun, Ido Local Government Area of Oyo State.

Oteri said the smugglers took advantage of the Yuletide season to smuggle the hazardous food products into the country.

He added that on sighting the customs team, the driver of the vehicle carrying the products abandoned it and fled.

“There was no arrest made; the driver just abandoned the vehicle and ran away.

“We are using this opportunity to warn smugglers to desist from their evil act or face the consequences,” he said.

Oteri, who also disclosed that the command recorded tremendous success in 2013, said:

“The determination of officers to intensify the execution of the war against smuggling utilising new strategies which the current management led by our Comptroller General exposed officers to a total of 252 seizures.

“We have since January seized 52, 620 cartons of frozen products amounting to N321.7 million, including the one we destroyed today.

“We, also among others, have seized general merchandise amounting to N10 million.

“The Comptroller General motivated us so well and we are determined to make sure that we track down smugglers.’’

BPE Says Privatisation Of Refineries Has Not Started