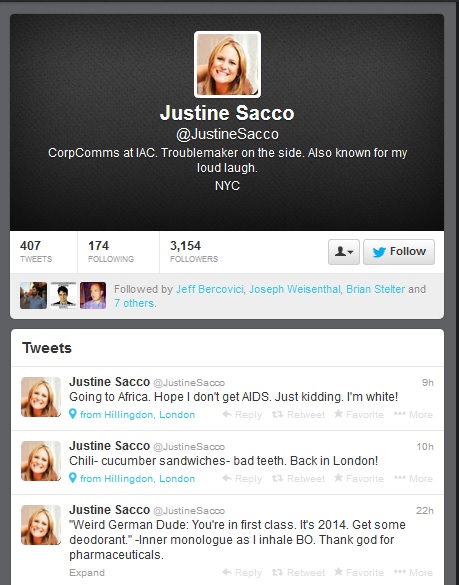 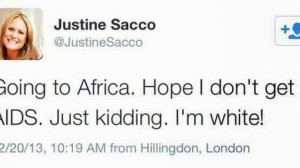 Justine Sacco, a PR executive who found herself at the centre of a Twitter firestorm after posting a racist “joke”, has lost her job as a result of the scandal.

The now-former director of corporate communications at media company IAC was about to board a plane to South Africa when she tweeted: “Going to Africa. Hope I don’t get AIDS. Just kidding. I’m white!”

Despite Ms Sacco only having around 200 followers, the message quickly spread to online news organisations, with social media users around the world expressing their disgust.

The irony of a supposed public relations expert tweeting such an insensitive comment, and the fact it could not be corrected during a 12-hour flight without an internet connection, meant the hashtag #HasJustineLandedYet was soon trending on the social media site.

Ms Sacco’s company IAC, which runs popular websites including OKCupid, The Daily Beast, Vimeo and Tinder, had already removed her details from their own site before she landed.

They have now issued a statement saying the company has “parted ways with the employee in question” following the “offensive comment”.

“There is no excuse for the hateful statements that have been made and we condemn them unequivocally,” IAC said.

“We hope, however, that time and action, and the forgiving human spirit, will not result in the wholesale condemnation of an individual who we have otherwise known to be a decent person at core.”

While the story of Ms Sacco’s tweet sparked a huge number of angry responses across social media, many users have said something good can come of it in the form of raised awareness for Aids charities.

At one point the Air for Africa website actually crashed due to a traffic overload, and the address www.justinesacco.com was bought and redirected to a page where users can make a donation to the charity.

Related Topics:TwitterTechmediaJustine Sacco
Up Next

Smart Cards Could Have Protected Target Shoppers From Identity Thieves