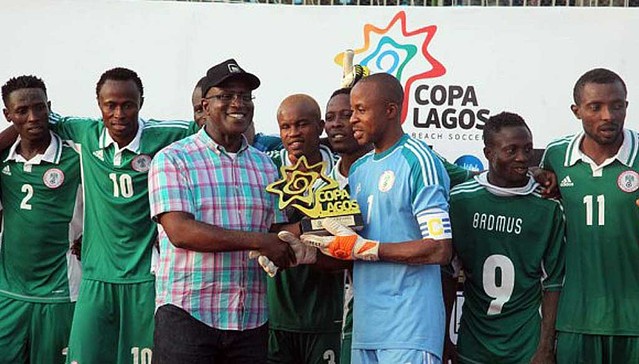 Nigerian Football Federation President, Aminu Maigari has hailed the players and coaches of the Nigerian Beach Eagles, after they won the COPA Lagos International Invitational Beach Soccer Tournament for a third consecutive time.

“I truly and sincerely commend the Supersand Eagles for their consistency in doing Nigeria proud,” Maigari said when the trophy was presented to him on Tuesday in his office

“This is the third time they are winning the trophy and this makes it the 10th trophy that the present NFF administration has won for Nigeria.

“I congratulate the players and their officials and pledge that the NFF will continue to support all our National Teams, including the Supersand Eagles, to do Nigeria proud in international championships.”

Related Topics:Aminu Maigari
Up Next