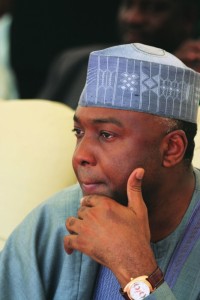 Internal Crisis hits the leadership of the All Progressives Congress (APC) in Kwara State as members reject Senator Bukola Saraki from taking over the party structures.

The members unanimously moved against the immediate past governor of Kwara State, following reports that the chairman of the Senate Committee on Environment, has taken over the All Progressives Party (APC)’s structure in Kwara State.

The Interim state chairman of APC, Rev. Bunmi Olusona, in Ilorin at a media briefing, said party members are yet to be briefed that Senator Saraki has been given a lifeline by handing over the APC structure in Kwara to him.

According to the Chairman, the APC’s interim national publicity secretary, Alh Lai Mohammed was quoted to have told the party’s four man fact finding delegation that “already the party structure which we laboured hard to build had been ceded to Saraki and his group and that there is nothing anybody could do except what Saraki wishes for our people.’’

The Publicity secretary was quoted to have said any aggrieved member has a choice of either leaving the party or accept the arrangement.

Though, Olusona stated that his group was not against the defection of the Sarakis into APC, he said,”what we are against is our party’s leadership collective resolve to cede the party machinery to the hands of Saraki.”

According to him, “It has become pertinent for us here to state that while we welcome Senator Bukola Saraki and his members into the party, he should not receive any privilege in his entry into the party.”

Olusona said that it was in an effort to ensure the advancement of the party that an 8-man Interim Executive Committee was appointed last weekend to oversee its affairs.

The APC national leadership handed over the party’s structure in the state to Saraki in line with the demand made by the state governor, Alhaji Abdulfatah Ahmed, when APC’s leaders came to Ilorin, the state capital, to woo him and members of the new Peoples Democratic Party (nPDP) into their party.

Ahmed had said Kwara has a winning political machinery in place which in the past four decades had dictated the political tune of the state and that Saraki is the state’s political leader.

Related Topics:PDPAPCKwara State
Up Next