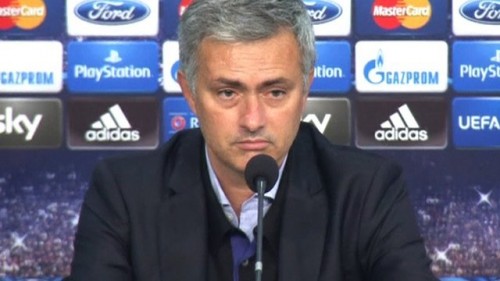 Chelsea manager Jose Mourinho believes his Chelsea side are not leading contenders to win any trophies this season because they rarely mean business in front of goal.

The Blues beat Crystal Palace 2-1 to move two points behind Premier League leaders Arsenal ahead of their meeting at Emirates Stadium on 23 December.

“I don’t think we are the big contenders of any competition,” Mourinho told the BBC.

“We don’t have the striker who is going to score 30 goals in the league.”

Just five of Chelsea’s 32 league goals this season have been scored by strikers: Fernando Torres (two), Samuel Eto’o (two) and Demba Ba (one).

“We know we don’t have that striker we used to call the killer, the selfish one, the one that gives the last touch,” said Mourinho.

“When you don’t kill you know you are on the edge and any mistake can lose you points. Today could finish 5-1 or 2-2 and that is hard for my heart.”

Early Bath For Reuben As He Sees Red