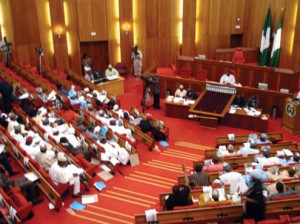 Sen. Gbenga Kaka (APC-Ogun) on Tuesday in Abuja said that the Senate had decided to delete section 13 (3) from the proposed bill on electronic fraud because it could be abused and misinterpreted.

The section stipulates a seven-year jail for people who intentionally publish slanderous messages about government electronically.

“Anyone who intentionally propagates false information that could threaten the security of the country or capable of inciting the general public against the government through electronic message shall be guilty of an offence.

“And upon conviction shall be sentenced to seven years imprisonment or N5 million fine. ”

Kaka, who announced this to newsmen, said the decision was taken after due consultation with stakeholders.

“Following the public hearing which was held after the second reading, the section 13 (3) of the provision was taken exception to by the social media.

“And since the bill is now in the public, I decided to consult with the Senate Committee Chairman on Information, Media and Public Affairs, and that of Judiciary.

“After consultations, we resolved that section 13 (3) of the proposed bill could be abused at any point in time and could be misinterpreted.

“And as a result, I have their permission to announce to the world that that section shall be deleted,” Kaka, who sponsored the bill, said

The bill is entitled: ‘’A bill for an Act to provide  for the prohibition of and punishment for electronic fraud and crime in all electronic transactions in Nigeria.’’

The bill passed through the second reading in the senate and was greeted with a lot of criticism from the social media.

Kaka expressed gratitude for all the contributions made both locally and internationally, adding that they further enriched the bill.

He added that more suggestions and debates concerning the bill would still be welcomed, to further enrich it in the overall interest of the country.

The lawmaker emphasised that the bill was not to gag the media but rather targeted against the misuse of the Internet, to curb the activities of scammers.