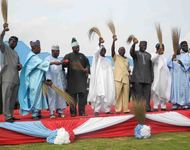 The much awaited peace deal meeting with the Governors of the People’s Democratic Party (PDP) that hadn’t defected was held at the Presidential Villa Sunday with President Jonathan.

But surprisingly, two  Peoples Democratic Party governors who  had defected  to  the All Progressives Congress made a surprise appearance at a peace meeting.

The two governors are   Rabiu Kwankwaso of Kano State and  Aliyu Wamakko of Sokoto State.

Kwankwaso and Wamakko were driven into the premises of the First Lady Conference Hall, Presidential Villa venue of the meeting in the same car at about 9pm according to reports.

They arrived about an hour after one of the aggrieved PDP  governors, Babangida Aliyu of Niger State, arrived the venue.

The defected governors to the opposition All Progressives Congress, had vowed not to return to the ruling party. Aliyu, and the National Security Adviser, Col. Sambo Dasuki (retd.), were already seated at the venue when Kwankwaso and  Wamakko arrived.

The Chairman, Board of Trustees of the PDP, Chief Tony Anenih, who also arrived before them went to confer with the President inside his residence before joining them at the venue.

Jonathan and Vice -President Namadi Sambo arrived the venue at about 9.50pm.

At 10pm, other  PDP governors who had earlier met at  the Akwa Ibom State Governors Lodge   in  Asokoro arrived the venue of the meeting.

Another aggrieved governor , Sule Lamido of Jigawa State was absent at the meeting but details of the meeting with the President is yet to be made public.

Advertisement
Related Topics:APCKwankwasoPDPWamakko
Up Next