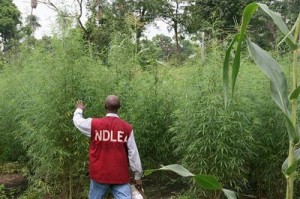 In a statement, Ahmadu Giade, the chairman of the Nigeria’s National Drug Law Enforcement Agency (NDLEA), said: “It is sad and disturbing that most farmers are now abandoning food and economic crops for cannabis.”

The NDLEA boss said that more than 1,400 hectares of land was used last year for cannabis plantation.

“This 1,404.27 hectares of land could have changed the fortunes of our agricultural sector if properly utilised,” he stated.

The agency seized drugs worth 33 billion naira ($208 million/ 152 million euros) last year and prosecuted 1,720 suspects, it stated. It did not say how many suspects the agency convicted.

Among the drugs seized were cannabis, heroin, cocaine, ephedrine, methamphetamine and amphetamine, the NDLEA said.

“We shall continue to dislodge more drug trafficking syndicates because anytime we intercept drug from criminals, we are indirectly saving lives,” Giade said.

Some of the seized drugs — hidden in ear rings, buttons, necklaces, bangles and female belts — came into Lagos from Brazil and Pakistan, he alleged.

N222Million Worth Of Illicit Drugs Destroyed By Kano Command Of NDLEA