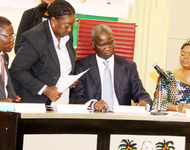 The Senate on Wednesday approved the inclusion of Lagos State Development Policy Operation II (DPO) into the proposed pipeline projects under the 2012-2014 external borrowing plan.

This allows the Lagos State Government to borrow the second tranche of 200 million dollars from the World Bank.

The senate took the decision after considering the report of the Sen. Ehigie Uzamere (APC-Edo) led committee on Local and Foreign Debts.

President Goodluck Jonathan had on Oct. 24, urged the National Assembly to include the Lagos State Development Policy Operation (DPO) of 200 million dollars into the 2012-2014 Medium Term Borrowing Plan (MTBP).

Jonathan said the fund formed part of the credit of 600 million dollars granted to the Lagos State Government in 2010 for implementation in three batches.

Jonathan’s letter to the Senate President, Sen. David Mark, which was read during a plenary session, said the amount was not captured in the 2012-2014 MTBP.

“The World Bank approved a Development Policy Operation (Budget Support) for a total credit amount of 600 million dollars to the Lagos State Government in 2010.

“The fund is expected to be implemented in three tranches of 200 million dollars each.

“The first tranche was approved by the National Assembly in the 2010 Borrowing Plan,” he said.

According to him, the Development Policy Operation (DPO) 1 was implemented in 2011.

“However, given the importance of the second tranche to the success and sustainability of the first tranche, I wish to submit it for your consideration for inclusion in the current borrowing plan.

The proposed 200 million dollars DPO is to enable the state to complete some critical infrastructure projects, including the Ultra-modern Burns Centre and Cardiac and Renal Centre in Gbagada.

The credit facility is also expected to cover the 27km light rail on the Lagos-Badagry Expressway Corridor to Marina and the completion of the 70 million gallon per day Adiyan water facility, among others.

PENGASSAN Urges FG To Rescind Decision Over Sale Of Refineries