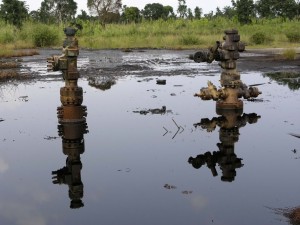 The Nigerian Senator for Kwara Central, Abubakar Bukola Saraki, is a controversial figure within a breakaway faction of the ruling People’s Democratic Party, whose differences with President Goodluck Jonathan have been well-recorded.

He also plays up his common ground with Rivers State Governor Rotimi Amaechi, a leading figure among a group of disaffected lawmakers and governors unhappy with Jonathan’s tenure.

Saraki believes the environment will improve only if companies understand that polluting will be more expensive than a clean-up.

He wants his Bill to pass for enactment before the end of the year, transforming Nosdra into an effective “Pollution Regulatory Agency”, able to sue and be sued and prepared to detect, minimise and respond to all spillages and discharges.

The new agency will also have the power to shut down operations where “continuous or Imminent spillage” is discovered.

All oil companies must, under the proposed legislation, submit “a satisfactory oil pollution emergency plan’ for approval by the agency in collaboration with the Nigerian Institute of Oceanography and Marine Research.

An Oil Spillage Liability Trust Fund would be established to remove pollution, funded by 0.2% of the operational budgets of all oil and gas companies.

Other government agencies may have access to these funds following appropriate application.

Saraki said: “Amnesty has drawn attention to an issue that causes a great deal of concern for our communities living with these oil spills… with oil companies taking advantage of the weak institutional, legal and regulatory and framework to misrepresent the true causes and extent of the environmental damage.”

He said that if the Nosdra Amendment Bill becomes law, “we would not need international non-governmental organisations to raise these issues, but be able to deal with them within our Nigerian legal system.”

Under the existing law, there is no penalty for oil spills apart from a maximum $6000 for late reporting.

Related Topics:NigeriaPDPAPCSenatorOil Spill
Up Next

The Women Around Oshiomhole’s Neck