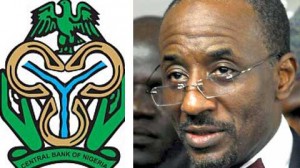 The Governor of the Central Bank of Nigeria (CBN), Mallam Sanusi Lamido Sanusi, has urged President Goodluck Jonathan to announce his successor at most three months to the end of his tenure.
Sanusi whose tenure is expected to expire by June 2014, over the weekend in Lagos cited the United States where a successor to Ben Bernanke was announced a few months to the end of the Federal Reserve Chairman’s tenure. .

The CBN Governor, responding to questions from participants at the 5th anniversary celebration, graduation and induction of the Women in Successful Careers (WISCAR) said the Central bank governors don’t comment on who they think their successor should be.

“It is not our business to do that; it is the president’s decision.”

Sanusi however added, “but if I have an input at all, I will try to encourage that we announce a successor two to three months before the end of my tenure so that everybody would know who that person is, what his or her views are, and so people can prepare accordingly.
The Central Bank Governor was commenting on the speculations over who might succeed him, Sanusi said some names had already been published in newspapers and more expected to be published.