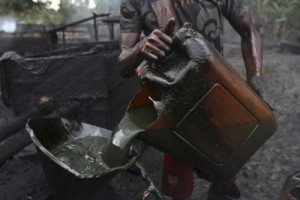 The Joint Task Force (JTF) in the Niger Delta said on Sunday in Yenagoa it had shut down 134 illegal crude refineries and seized two barges used by oil thieves.

In a statement to newsmen by JTF’s Media Co-ordinator, Col. Onyema Nwachukwu, the task force said the operation was carried out between Nov. 22 and Nov. 30 in Rivers, Bayelsa and Delta.

“Some of the camps were being regenerated by the oil thieves before the crackdown.

He said the barge had been towed to Nembe 1 flow station for safe custody.

The statement also said a wooden barge and two wooden boats conveying unascertained quantity of adulterated AGO were seized during patrols in Alakri-Okirika waterways in the Okirika LGA of Rivers.

It added that the wooden barge had been recovered and secured at Peterside House Boat, a detachment of the JTF.

Related Topics:NigeriaOil theft
Up Next