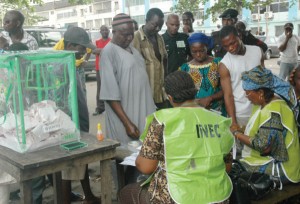 The All Progressives Grand Alliance (APGA) candidate, Mr. Willie Obiano, has been declared the winner in the Anambra State governorship election.

The Independent National Electoral Commission (INEC) announced that Obiano scored 180,178 to beat the Peoples Democratic Party candidate, Mr. Tony Nwoye, to the second position with 97,700 votes and Senator Chris Ngige of the All Progressives Congress,  who came third with 95,963. While the  candidate of the Labour Party candidate, Mr. Ifeanyi Ubah, came fourth with 37,495.

The Chief Returning Officer, Prof. James Epoke, the Vice-Chancellor of the University of Calabar made the declaration on Sunday.

Though three of the major political parties that fielded candidates called for its cancellation and vowed to boycott the supplementary election but the commission went ahead with the polls Saturday.

The supplementary election was eventually held on Saturday but was characterised by low turnout.

The main election, which held on November 16, could not be concluded on the same day and INEC announced that election in 65 polling units in Obosi ward in Idemili North Local Government Area would be repeated.

The Chief Returning Officer said the voting population in the areas where election did not take place was large enough to make the second or third person defeat the leading candidate. The election was declared inconclusive.

Following the development, INEC  declared  that supplementary election would in 210 polling units, where 113,113 voters could not vote on November 16. The areas affected  cut across 15 local government areas and most of them (160)were in Idemili North.