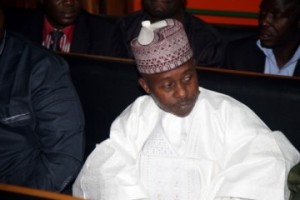 An FCT High Court on Wednesday fixed March 12, 2014 for the trial of Farouk Lawan and Boniface Emenalo over alleged $620,000 dollars (about N96 million) bribe.Messrs Lawan and Emenalo, both members of the House of Representatives, face a seven-count charge of allegedly obtaining N625 million bribe from Femi Otedola, the Chairman of Zenon Petroleum and Gas Ltd.

The two lawmakers were chairmen and vice chairmen respectively of the committee set up the House to probe the federal government’s subsidy payment for 2011. They allegedly received the money as bribe to clear Mr. Otedola’s company of any wrongdoing.

The whereabouts of the money, marked by security officials before being delivered to the lawmakers, has not been ascertained by the police.

On Wednesday, the two counsels agreed on the date following the absence of Justice Mudashiru Oniyangi, who was not in court because he was at the Nigeria Law School, Bwari, where he represented the Chief Judge of the FCT at the 50th anniversary of the school.

The counsel to Mr. Emenalo, Mike Ozekhome, and prosecutor, Adegboyega Awomolo, both agreed on the date.

At the last sitting, Justice Oniyangi refused to grant Mr. Lawan’s application for stay of proceedings.

Mr. Oniyangi also refused to grant the application by Mr. Lawan to adjourn the case indefinitely pending the determination of an appeal before the Appeal Court in Abuja.