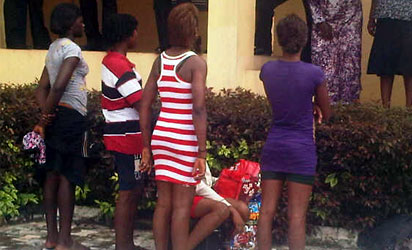 A middle aged woman, Chinwe Chinasa, has been arrested for allegedly trafficking six young girls to Libya for prostitution.
The Ondo state Police command said Chinasa was arrested at the Olufoam area of Federal Housing Estate, Shagari Village in Akure following a tip off.
The Police command’s image maker, Wole Ogodo, said  it was discovered that the six young girls had been prepared for the journey to Libya. Mr Wole revealed that part of the preparation was shaving of their hairs and cutting of their nails.
Some Nigerian international passports, cheque books of different banks and fake Naira notes were recovered from the suspected trafficker’s house.

Some of them said they were virgins before being recruited. They pleaded that the police should have mercy on them.

Mr Ogodo insists the suspects will be charged to court