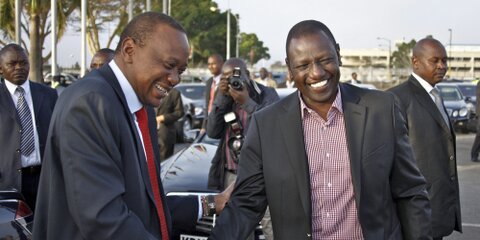 (Reuters) – Kenya will demand change at the International Criminal Court on Thursday to try to ensure its president does not face charges of crimes against humanity in the aftermath of an election in 2007 when 1,200 were killed.

Kenya, which has tried to halt the cases against President Uhuru Kenyatta and his deputy William Ruto, will press a meeting of the ICC’s 122 members for an immediate change in the rules to say that heads of state do not have to attend trials.

Officials will also argue for a longer-term amendment to the founding treaty that would ban the prosecution of heads of state, a campaign which has become a rallying point in Africa, where many leaders say they are the target of an overzealous court in The Hague.

Kenyatta and Ruto deny the charges of fomenting violence after the election. Ruto’s trial began last month, while Kenyatta’s trial is due to start on February 5 after being delayed for a third time.

Last week, the African Union lost its bid to have the U.N. Security Council defer the cases for a year so the two could deal with the aftermath of an attack on a shopping mall by al Qaeda-linked Somali militants.

Kenya, a key partner in the West’s fight against militant Islam in Somalia, said the outcome highlighted the need for reform of the Security Council to prevent a few powerful nations imposing their will on the world.

Kenya will present its arguments at the ICC’s annual meeting, which started on Wednesday and has another week to run.

Human rights groups oppose the proposed changes as well as apparent compromise solutions such as a British proposal that would make it easier for the accused to participate via video link, saying these would weaken the court’s mission to bring to justice those ultimately responsible for war crimes.

Sang-Hyun Song, the court’s president and senior judge, warned member states of the dangers of acting with “undue haste”, urging them to “reflect carefully” on any amendments.

Since their election, the two men have been defending themselves before the Hague-based court with the help of some of London’s best-known human rights lawyers.

Kenyatta’s legal team has asked judges to throw out the case against him, which they say is based on evidence from bribed witnesses.

Days before launch, Obamacare website failed to handle even 500 users