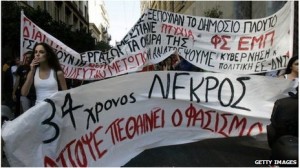 The head of the Eurogroup, Jeroen Dijsselbloem, has said the Eurozone finance ministers are losing patience with Greece as the country submitted its 2014 budget.

Greece will exit its six-year long recession next year with 0.6% growth, the budget said.

The debt-laden country has received international bailouts since May 2010.

At The Hague, Mr Dijsselbloem told a Greek newspaper, the Ta Nea daily, that “many finance ministers of the eurozone are starting to lose patience”.

Greece’s deputy finance minister, Christos Staikouras, said the country’s economy would shrink by 4% this year, below the 4.5% predicted.

He said: “For the first time, the major sacrifices made by the Greek people are paying off, with the first signs of recovery this year.

“The conditions are being created for Greece’s return to international markets within 2014.”

CBN Names ‘Too Big To Fail’ Banks, Is Your Bank Mentioned? [SEE List]