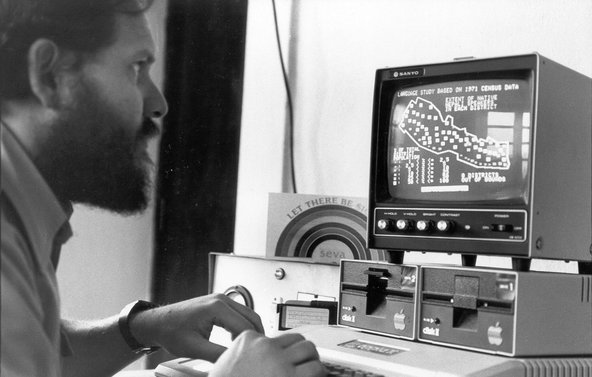 On a recent night at an elegant Beaux-Arts ballroom in San Francisco’s financial district, Laurene Powell Jobs received a computer with an unusually rich history. Around 1980, Ms. Powell Jobs’s husband, Steven P. Jobs, donated the computer to a nonprofit organization, the Seva Foundation, to help the group manage data from its efforts to restore sight in the developing world.

The nonprofit was now giving the computer — an Apple II that spent the last 33 years in Katmandu, Nepal, most of it packed away in a hospital basement there — back to Ms. Powell Jobs and her children from her marriage to Mr. Jobs.

The Apple II would be little more than an artifact in the history of a nonprofit if it was not also a rare symbol of the charity of Mr. Jobs, a man celebrated for his vision and leadership in the technology industry but who was routinely criticized before his death for his lack of giving. Some other billionaire technology innovators have given away huge chunks of their wealth — most notably Mr. Jobs’s longtime rival, Bill Gates. But Mr. Jobs shied away from philanthropy, at least of the public variety. Although his wife has long been an active benefactor of various causes, Mr. Jobs was portrayed as somewhat disdainful of philanthropic endeavors by his authorized biographer, Walter Isaacson.

That perception of Mr. Jobs has troubled Larry Brilliant, a longtime friend of Mr. and Ms. Jobs who, as a young physician, co-founded Seva in 1978. “I do want to counter the meme that he was disinterested in philanthropy and things for the greater good,” said Dr. Brilliant. “It wasn’t true.”

Dr. Brilliant has a close-up view of the intersection between technology and philanthropy. He is the president of the Skoll Global Threats Fund, a nonprofit created by Jeff Skoll, a co-founder of eBay. Before that, Dr. Brilliant ran Google.org, the philanthropic arm of the search giant.

He also had a unique perspective on Mr. Jobs, first meeting him in India in the early 1970s when an enlightenment-seeking Mr. Jobs showed up with bare feet and a shaved head at the Himalayan ashram where Dr. Brilliant was living. Dr. Brilliant went on to oversee a smallpox eradication program in India for the World Health Organization. Mr. Jobs came back to the United States and started Apple.

Mr. Jobs got back in touch with Dr. Brilliant in the late 1970s, after reading a magazine article about his smallpox efforts in India. By then, Mr. Jobs was on his way to becoming a millionaire through Apple, and he wrote a $5,000 check to Dr. Brilliant so that he could create the organization that became Seva, which planned to make cataract surgery widely available to the poor.

While the amount from Mr. Jobs was small, that first spurt of money was meaningful for the organization, Dr. Brilliant said, and had a galvanizing effect on other donors, helping it to quickly raise a total of $20,000 in a few weeks. “Seva wouldn’t exist without that grant,” he said.

A letter from Mr. Jobs to one of Dr. Brilliant’s Seva co-founders around that time bears the letterhead of Apple Computer with one of its earliest corporate addresses on Bandley Drive in Cupertino, Calif. “I wholeheartedly accept your invitation to become a ‘member’ of SEVA,” reads the letter, signed by “Steven Jobs,” with the first letter of both names in lowercase. “Please let me know of any other specific opportunities where I can be of service.”

He gave the organization the computer around 1980, to help Seva enter and analyze survey data from its eye surgeries in Nepal. Mr. Jobs threw in a copy of an early spreadsheet program, VisiCalc, and an external hard drive that he boasted was the largest of its kind.

“You’ll never be able to use all the memory,” Dr. Brilliant recalled Mr. Jobs telling him. “It’s five megabytes!’”

The computer also played an accidental role in the evolution of online communities. When a helicopter ferrying several ophthalmologists went down in a remote area of Nepal because of an engine failure, Dr. Brilliant used the Apple II to set up an electronic chat using a primitive modem to help figure out how to salvage the helicopter. Participants around the world, including the maker of the helicopter, Seva colleagues in Michigan and World Health Organization offices, were linked together through their keyboards.

Dr. Brilliant credits that “computer conference call” as one of the inspirations behind the Well, an early online community that he co-founded. The Well was a progenitor of AOL, Facebook and other forms of social networking.

Ms. Powell Jobs accepted the computer with her son, Reed, at a ceremony commemorating the organization’s 35th anniversary. Seva says it has helped restore sight to 3.5 million people in Bangladesh, Cambodia, Nepal, Tibet, India and other countries since it was founded.

“Steve was always very clear about his role in the genesis of Seva and it was his privilege to help support the heroic on-the-ground work of the doctors and health professionals involved in this courageous effort,” Ms. Powell Jobs said in a statement. “It’s amazing Seva found the Apple II donated by Steve and our family is thrilled to have it returned.”

Based on his conversations with Mr. Jobs over the years, Dr. Brilliant said he was confident that Mr. Jobs, had he lived longer, would have eventually turned his attention to philanthropy. In the two years since his death, Ms. Powell Jobs, with a net worth estimated at more than $11 billion by Forbes magazine, has become more visible with her own philanthropic activities, supporting prominent causes like immigration reform, education and gun control.

Mr. Brilliant said Mr. Jobs didn’t give away his wealth sooner because Apple was an all-consuming passion for him.

“I only know how to do one thing well,” Mr. Brilliant said Mr. Jobs told him. “I think I can help the world by doing this one thing.”

The Internet of Everything: Where Technology and Innovation Meet To Make the World a Better Place