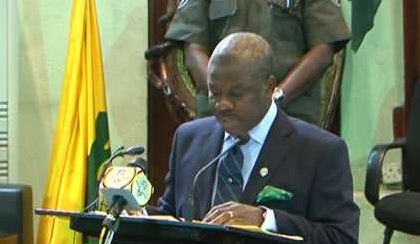 Governor of Ogun State, Ibikunle Amosun has presented a N210.21bn budget for the 2014 fiscal year to the Ogun state House of Assembly.

The proposed budget shows a marginal reduction of N1.57bn from the 2013 budget which was put at an estimate of N211.78bn.

During the presentation, the Governor explained that the 2014 budget shows that the state is receiving lesser funds from the federation account now:

“We encountered some challenges in the implementation of the 2013 budget. We are not insulated from the wider national economic challenges. The funds from the Federation Account and Value Added Tax have been significantly lower than expected.”

The Education sector gulped the largest allocation of N43.99bn, which is about 20.93 per cent of the entire budget proposal. Education also got the highest allocation in the 2012 and 2013 budgets in the state

Jonathan Turns 56 As FEC Celebrates With Him