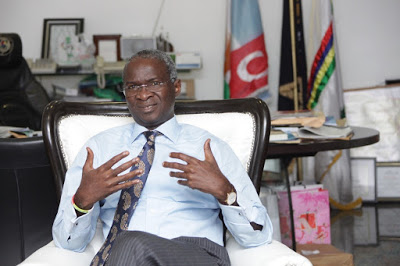 The Minister of Works and Housing, Babatunde Fashola, has revealed that the the shortage of younger engineers/technical officers in the ministry is hindering efficient supervision of highways project across the nation.

The former governor of Lagos state disclosed this on Wednesday at a 2023 budget defence session with the Senate Committee on Works.

The minister said: “The main challenge to highways development in the country remains inadequate funding.

“As at date, the government is committed to highway contractors to the tune of about N10.4trillion while a total of about N765billion are unpaid certificates for executed works.

“Secondly, the shortage of younger engineers/technical officers in the ministry as a result of embargo on employment is affecting proficient project supervision at the sites”.

However, chairmen and members of the committees commended the Minister for a series of roads and Housing projects executed across the country in the face of scarce resources and other challenges.

Chairman of the Senate Committee on Housing, Senator Sam Egwu ( PDP Ebonyi North), told the minister to use the proposed N45billion capital votes in the 2023 budget to complete the remaining 3,000 units of the 6,000 units National Housing Project.

At the Committee on Works , headed by Senator Adamu Aliero (PDP Kebbi Central), the Minister was tasked with ensuring completion of the 2nd Niger Bridge this year and the critical road projects he highlighted.