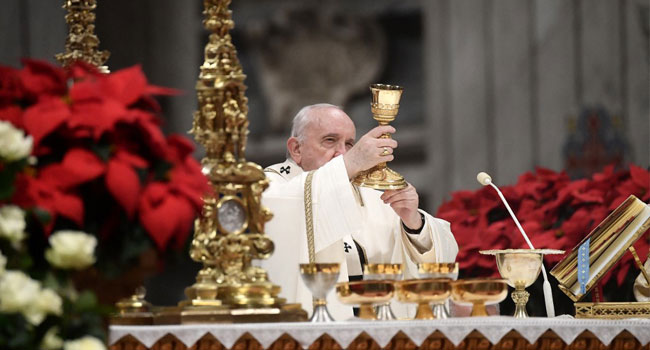 Pope Francis Friday called on the faithful to value the “little things in life” and show solidarity with the poor in his Christmas Eve mass in St. Peter’s Basilica.

The Vatican’s press office said that some 2,000 members of the public and 200 religious figures attended, wearing face masks and respecting social distancing as part of measures against the coronavirus.

Those who had not managed to grab a ticket watched on giant screens outside St Peter’s Basilica.
The 85-year-old Argentinian pontiff recalled the shepherds in the tale of the nativity, who lived modestly and were witnesses to the birth of Jesus.

“That is where Jesus is born: close to them, close to the forgotten ones of the peripheries. He comes where human dignity is put to the test.”

He called for people to seek out “littleness” — in “our daily lives, the things we do each day at home, in our families, at school, and in the workplace”.

“Jesus asks us to rediscover and value the little things in life,” he said. Francis, formerly the Archbishop of Buenos Aires Jorge Mario Bergoglio, called for more solidarity with those living in poverty.

“On this night of love, may we have only one fear: that of offending God’s love, hurting him by despising the poor with our indifference,” he said.
It was the second such Christmas Eve mass during the coronavirus pandemic.