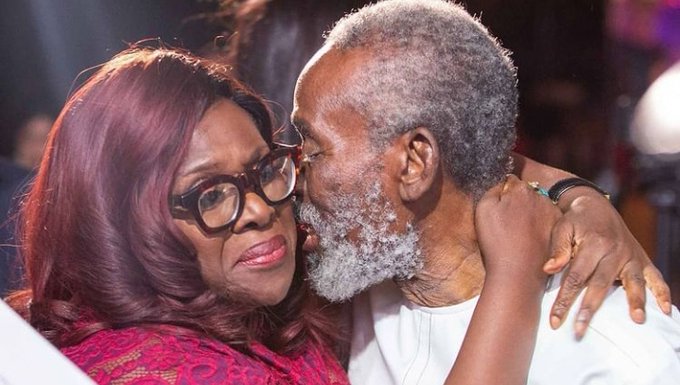 Veteran actress, Joke Silva, has for the first time publicly announced what is wrong with her husband, also a Veteran Actor, Mr Olu Jacobs recently seen at a Public Function in Lagos.

In an interview with Jideonwo Chude, the actress opened up on Olu Jacobs’ frail and fragile state of health. She revealed that the husband has dementia with Lewy bodies (DLB).

She expressed that it had been hard on her husband because he did not understand what was going on and it had been tough also for the family members.

“We have gone through it over the past couple of years but we thank God.

“We have gone through some times and situations recently that I wish I had the old you here so I don’t battle these times on my own but we are grateful for the moment of clarity. I miss the times we worked together.”

Silva had last month, refuted claims online alleging that her husband had died shortly before making the public appearance last week where he was awarded.

“Don’t mind them, they’re just talking rubbish; don’t disturb your head. He is in the living room right now about to have eba and ogbono soup. Let them keep deceiving themselves. He is hale and hearty,” she had said.