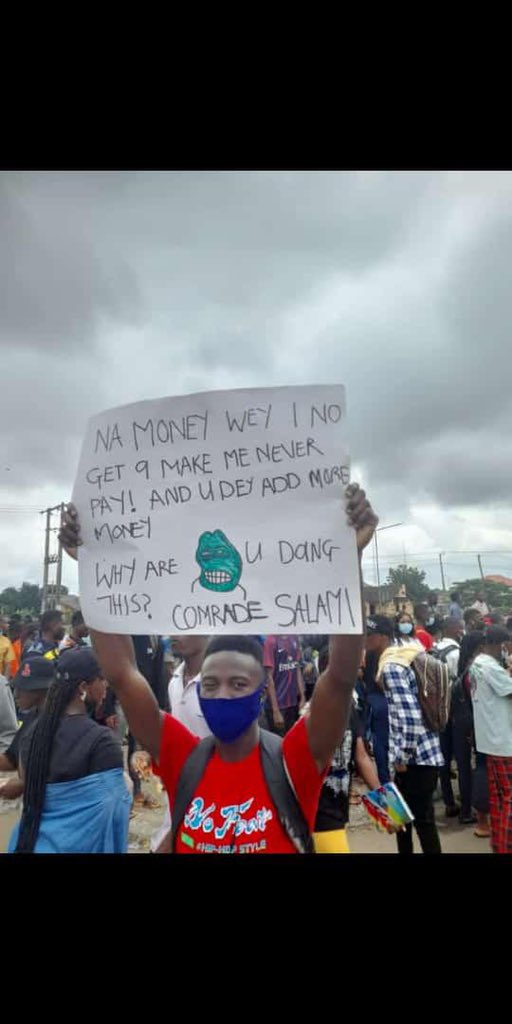 Some aggrieved University of Benin students on Tuesday morning mounted road block at the university’s main campus in Ugbowo to protest the alleged imposition of N20,000 late registration charge from the institution.

The protest disrupted the free flow of traffic on the Ugbowo section of Benin-Ore highway.

One of the protesting student who spoke to Vanguard said the late registration charge by the university management is unfair considering the current economic reality of many Nigerians.

“Madam Vice Chancellor increased tuition fees by N20,000. This is so sad and we will continue the protest unless the decision is rescinded,” the student told the paper.

“Earlier this semester, the management of the University of Benin announced that it would put extra charges if school fee was not paid on time and we are saying they should not charge for late payment because the time is not okay.

“The N20,000 additional charge is unbearable for the students; though a lot of students have paid school fees, but those ones that are unable to pay, truly don’t have the money now.

Egwu further alleged that the management had threatened to withdraw any student who failed to pay.

“The excess of N20,000 is uncalled for. Before now, what we used to do is no school fees, no examination; there’s no problem about that.

“What the students are doing is right, protest is not a bad thing, it is a way of appealing particularly when they feel cheated.”

When quizzed if the student union had taken other means of resolving the disagreement, Egwu said the union had approached the university’s management.

“Well, I have done my bit. I have spoken with the management and posited my idea on what I feel.

“I believe they heard me and the message is clear. I am expecting the management to act and I believe they will act in no distant time; there is no need to rush,” the SUG president said.