5 hours ago
Why I was summoned to EFCC – Bukola Saraki
5 hours ago
Farooq A. Kperogi: Abba Kyari and His Red Flags of Vulgar Exhibitionism
1 day ago
Abba Kyari faces dismissal from the Nigerian Police
1 day ago
BREAKING: Nigerian athlete, Blessing Okagbare, suspended from Tokyo 2020 Olympics
1 day ago
“I decree confusion into the camp of your enemies” – Abba Kyari’s brother, Usman

Popular Niger Delta militant group, ‘Movement for the Emancipation and the Defence of the Niger Delta’, (MEND) has promised to avenge attacks if a faceless Fulani militia group ‘Fulanis of Usman Dan Fodio Leadership’ group carries out its threat to invade and bomb Asaba, the state capital and Agbor.

The reprisal threat is off the heels of an attack on the fire incident that gutted the Federal Secretariat complex along Okpanam Road, Asaba in which the faceless Fulani terror group claimed in a letter.

The group further threatened the Delta State Governor, Ifeanyi Okowa to withdraw his policy that banned open grazing in the state within 72 hours. 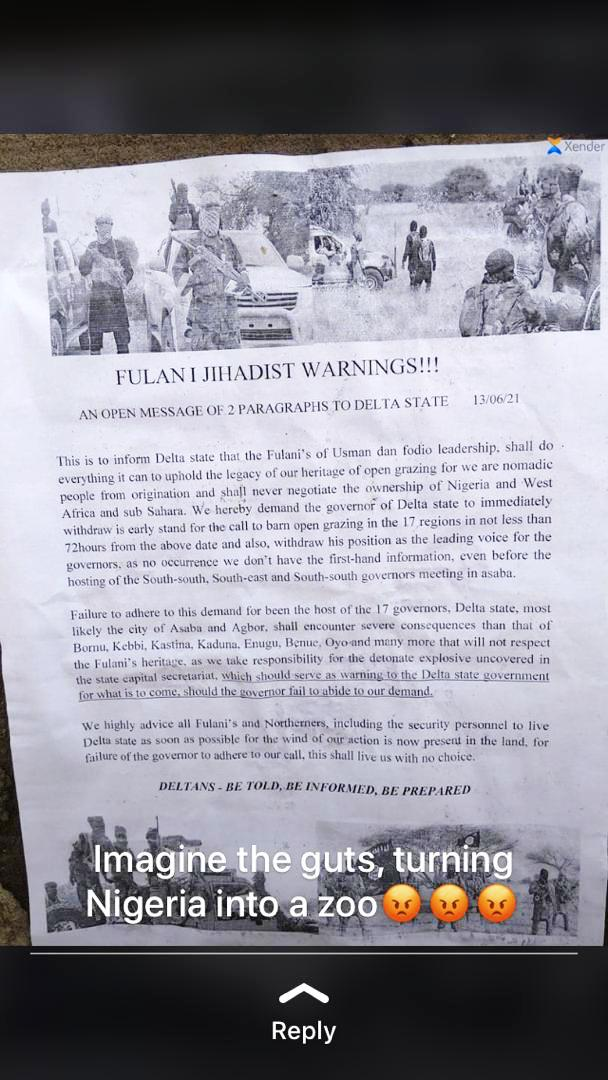 Threat of the Jihadist

However, reacting to the threat of the Fulani group that has now caused panic in Delta State, the MEND in a statement obtained by NewsWireNGR on Monday vowed to launch its own avengeful attack that would be ten times more than the ‘Fulani Jihadists’

MEND said, “The attention of the Movement for the Emancipation and the Defence of the Niger Delta has been brought to the threat of some Fulani terrorists who have given a 3-day warning to the governor of Delta state because of his support for the ban of open grazing across the Southern States. We also saw your taking responsibility for an explosion at the secretariat in Asaba.

“We are warning that if your threat is made to come to fulfilment, No Fulani will ever exist across the Niger Delta and all oil facilities linked to a Fulani will be brought down. If one soul is lost, ten Fulani souls will pay for it. If one facility is destroyed, ten Fulani facilities will be destroyed. We will respond proportionately ten times to whatever you give, the corresponding response will not be limited to the Delta, It may be with your politicians or with your rulers.

“We will launch three rocket launchers and ballistic missiles at any facility of our choice as a warning in seven days if you make bold your threats. We don’t make cheap our threats. We have shut down the country and we can at any time shut you down. We are the Niger Delta, We stand for the interest of the Niger Delta and we will not allow any coward to threaten us. We fight without running.”

Who is Nnamdi Kanu? Everything you need to know about the Biafra separatist extradited to Nigeria