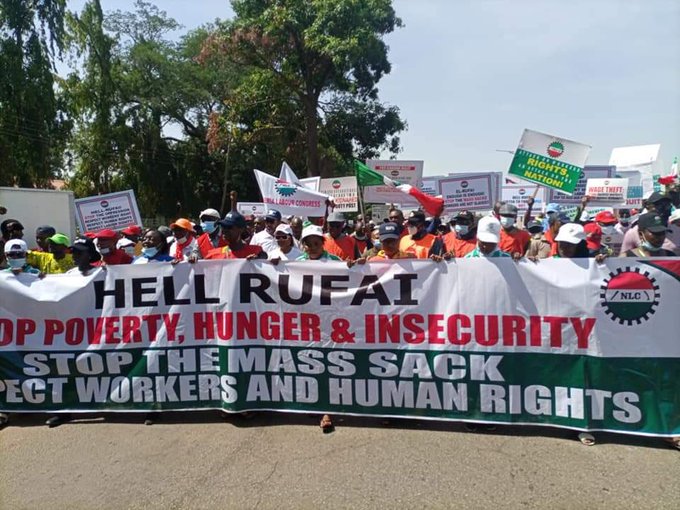 Governor Nasir El-Rufai has vowed to dismiss all the nurses and lecturers who engaged in the ongoing protest action by the National Labour Congress, NLC, in the state.

Issuing a statement signed on Tuesday, by his spokesperson, Muyiwa Adekeye, the governor said the state government would not “tolerate the brazen shutdown of electricity, attack on public infrastructure and buildings, locking up hospitals and forcefully discharging patients, unlawful trespass into public facilities and the wanton use of coercion and restraints of personal freedom by the NLC”.

KDSG will not tolerate criminal acts disguised as industrial action

Today, the Kaduna State Government reviewed the sundry criminal actions that have defined the campaign of economic and social sabotage and lawlessness waged by the NLC.

KDSG considers as unacceptable the serial violations of the Miscellaneous Offences Act and the Trade Union Act that have occurred over the last two days. The state government commends citizens for remaining calm amidst this assault on their rights and comfort and their businesses.

However, KDSG cannot be expected to tolerate the brazen shutdown of electricity, attack on public infrastructure and buildings, locking up hospitals and forcefully discharging patients, unlawful trespass into public facilities and the wanton use of coercion and restraints of personal freedom by the NLC.

Efforts to dress up criminal activity as industrial action do not change the reality of the lawbreaking that has unfolded, including their persistently ignoring the prohibition against impeding essential services. Also, KDSG cannot ignore the illegal pressures brought to disrupt the operations of banks and other private business whose staff and customers do not have any industrial dispute with the state or any other government.

KDSG acknowledges doctors and some other categories of health workers that are trying to run public health facilities, but regrets that some nurses have joined the unlawful strike and engaged in sabotage of some of our health facilities. Nurses were implicated in the forceful discharge of patients in many health facilities.

Reports from Barau Dikko Teaching Hospital disclosed that some identified nurses disconnected the oxygen supply of a two-month old baby in an incubator on Monday, 17th May 2021. The Special Baby Care Unit (SBCU) who were involved in this despicable act have been forwarded to the Ministry of Justice to initiate prosecution for attempted murder or murder in the event we lose the baby.

In addition, KDSG has decided the following:

Ayuba Wabba and his senior confederates in the NLC are declared wanted, and will be vigorously prosecuted for violations of the Penal Code of Kaduna State, the Miscellaneous Offences and the Trade Dispute (Essential Services) Acts. They are advised to report to the Ministry of Justice and the Police Headquarters to take their statements;
The Ministry of Health will dismiss all nurses below GL 14 for going on an unlawful strike.

Salaries that could have gone to them are to be given as extraordinary occupational allowances to the health workers who are at their duty posts to fill the gap of those absconding from duty. The Ministry of Health has been directed to advertise vacancies for the immediate recruitment of new nurses to replace those dismissed;
Any academic staff of KASU that does not report for work will be dismissed.

KDSG views the actions of the NLC as equivalent to the actions of the bandits kidnapping and menacing our citizens. Bandits illegally use arms, but the NLC is deploying mob action for exactly the same ends: trying to hold hostage the freedoms, economic interests, livelihoods and resources of the people of Kaduna State. It is a vain expectation that this government will respond differently to sets of unlawful actions that have the same ends.

KDSG will not submit its treasury to the entitled minority. We will reform and rightsize our public service to meet the needs and resources of the Kaduna State even if the NLC strikes ad infinitum. The government remains committed to using all the resources it can generate to serve the interests of the majority of its citizens, providing social services beyond paying salaries, always putting the interests of the many ahead of the few.