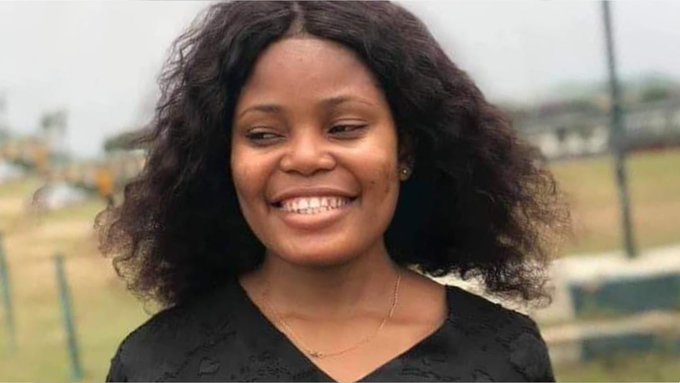 Iniubong Umoren, a jobseeker who went missing after she went for a job interview in Uyo, Akwa-Ibom State, has been found dead.

The news of her death was announced by a Twitter user, @UmohUduaki who had raise the alarm on her missing friend early Sunday.

Iniubong left home for an interview at Airport Rd in the outskirts of Uyo April 29, 2021. About 2 hours later, she was said to have made a frantic phone call to her friend where she was heard screaming before the call was abruptly ended. Her phone was switched off shortly after that.

Her friend alleged that she was abducted by one Uduak Frank Akpan, from Nung Ikot Obio, after he lured her on social media with a fake job offer. The police said on Friday, April 30, that an investigation into the case has began and two persons have been arrested.

However, in a post shared on Sunday morning, May 2, @umohuduak1 revealed that she was raped and murdered by her abductor. Details of her death are still sketchy, she was reportedly murdered and buried in a shallow grave.

“They killed my friend and they buried my friend,” she tweeted with a video of her in tears.

The confirmation came as #FindHinyUmoren was gaining traction on social media, garnering attention from many concerned Nigerians as individuals tried to locate the missing lady.

Ever since her friend raised the alarm, #HinyNumoren started trending and through Twitter, the families were able to zero in on the suspects who might have committed the act.

The suspects allegedly lured her after she announced on Twitter on April 27 that she was in need of a job.

“#AkwaIbomTwitter please I’m really in need of a job, something to do to keep mind and soul together while contributing dutifully to the organisation. My location is Uyo, I’m creative, really good in thinking critically and most importantly a fast learner. CV available on request.”

The news of her demise has since further the conversation and Twitter users are reacting disappointedly on the unemployment rate in the country that has been pegged at 33% according to the last report by the National Bureau of Statistics.

They are also calling for the arrest and detention of the culprits.