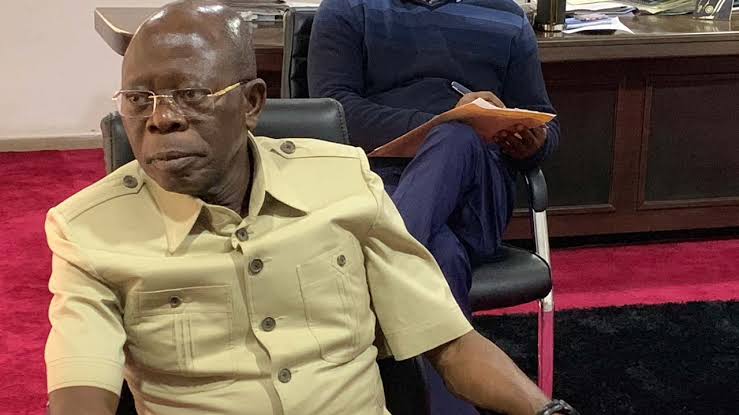 The Former national chairman of the All Progressives Congress (APC), Comrade Adams Oshiomhole, has denied accusing the Governor of Kaduna state, Nasir El-Rufai, of being responsible for the banditry and killings in the state.

Oshiomhole in a statement he personally signed and released on Friday night, noted that a report by an unnamed “obscure online media”, misrepresented the speech he delivered at the 2nd Nigeria Labour Congress (NLC) National Peace and Security Summit, held in Abuja on Thursday April 29, 2021.

According to the former Governor of Edo state, at no time did he make reference to Governor Nasir El-Rufai or the retrenchment of civil servants by the Kaduna state government, during the entire speech.

“In the body of the report, the writer maliciously misrepresented the speech delivered by me at the 2nd Nigeria Labour Congress (NLC) National Peace and Security Summit, held in Abuja on Thursday April 29, 2021.

“As rightly reported by all the mainstream national newspapers and television networks that gave media coverage at the event, I blamed the worsening security situation in the country partly on the massive closure of factories over the years by successive governments.” He wrote.

“At no time during the entire speech did I make reference to Gov. Nasir El-Rufai or the retrenchment of civil servants by the Kaduna state government.

“There was no consonance of opinion in the position I advocated as being responsible for the heightened security challenges in Nigeria today and that of the NLC President, Comrade Ayuba Fhilibus Wabba, as can be clearly deduced from the accurate reports of the newspaper correspondents and electronic media personnel that were present [at] the summit.” He further stated.

Related Topics:OshiomholeEl rufai
Up Next