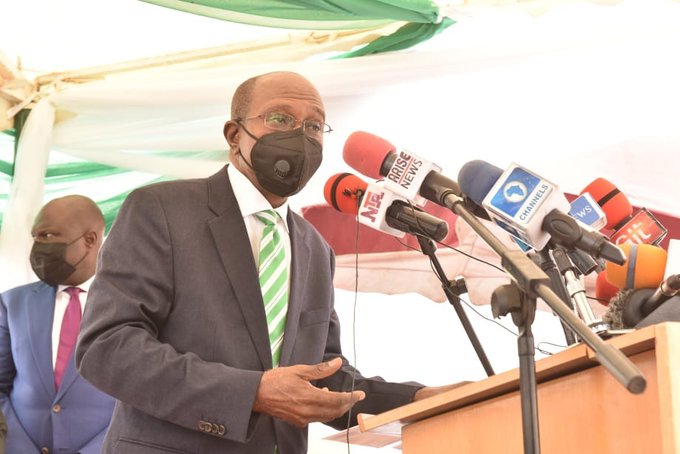 Central Bank of Nigeria (CBN) Governor Godwin Emefiele has said printing money is a cardinal job of the lenders.

Emefiele, on the official twitter handle of the CBN @cenbank on Friday, said printing money is about lending money.

Emefiele, on Friday, said it would be irresponsible for any Central Bank to refuse to support its government when it is in need. – He was to Edo Governor Godwin Obaseki who alleged the Federal Government printed N60bn to augment March allocation to States at the weekend.

He said: “The concept of printing of money is about lending money and that is our job…It will be irresponsible for the CBN or any Central Bank or Fed to stand idle and refuse to support its government at a time like this. #Emefiele.”

The Nigerian government had denied a claim by Godwin Obaseki, governor of Edo State, that N60 billion was printed in March to support allocation to states.

The minister of finance, budget and national planning, Zainab Ahmed, said this while speaking with state house correspondents in Abuja on Wednesday.

The minister said Mr Obaseki’s claim was very sad because it was “untrue”.

“The issue that was raised by the Edo State Governor for me is very, very sad,” Mrs Ahmed argued, “Because it is not a fact.”

Mr Obaseki had lamented the fiscal state of the nation, adding that Nigeria is in financial trouble.

While speaking at the Edo state transition committee stakeholders engagement, he claimed the government printed money to bridge FAAC allocation.

“When we got FAAC for March, the federal government printed additional N50-N60 billion to top-up for us to share,” he had said.

But Mrs Ahmed maintained Wednesday that FAAC allocation was sourced from revenues from different agencies of the federal government.

Obaseki did not stop at his earlier remarks, on Thursday, he replied the Finance Minister, “Rather than play the Ostrich, we urge the government to take urgent steps to end the current monetary rascality so as to prevent the prevailing economic challenge from degenerating further.”