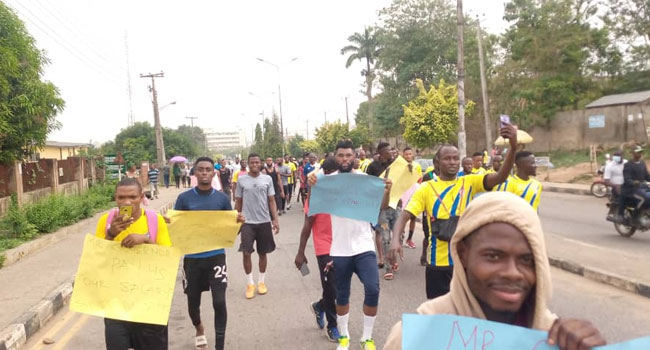 Players and officials of Sunshine Stars Football Club have taken to the streets of Akure, the Ondo State capital to protest the poor handling of the team by the state government.

Led by the Team Captain, Mr Abe Sunday the players also took their protest to the entrance of the Governor’s office in Akure.

The protest Tuesday, grounded commercial activities in the state capital as the players and officials marched from the stadium to the governor’s office to register their grievances.

According to the players and officials, they are being owed about six month’s salary and match bonuses.

They appealed to the government to resolve the issue as it has affected their performance in the Nigeria Professional Football League (NPFL).

Ondo State Deputy Governor, Lucky Aiyedatiwa, who added addressed them assured that their grievances will be addressed.

Related Topics:PlayersOndo State capital
Up Next