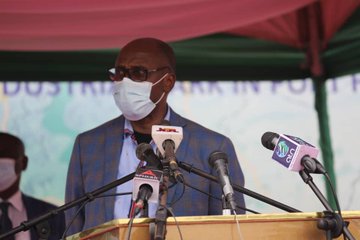 Minister of Transportation, Rotimi Amaechi has shed more light on the reasons behind the construction of a railway track from Kano, 40-45 kilometres to Maradi town in Niger Republic.

Many have questioned the 284-kilometer Kano-Maradi railway estimated to cost $1.96 billion
and wondered its economic significance to the country.

But speaking on Arise television programme, Thursday, monitored by NewsWireNGR, the Minister said the construction of the railway was first an economic decision developed by the administration of former President, Goodluck Jonathan.

He added that it is also a political decision as Nigeria’s contribution to the Economic Community of West African States (ECOWAS) community.

“That project is an ECOWAS project, it is a contribution by Nigeria to the ECOWAS rail-line. Whether we like it or not, we would still have done it if we claim to be ECOWAS.

“The government of ex-President Goodluck Jonathan did the feasibility study and agreed that there is a need to construct that railway line. I read the feasibility studies and I agree that it means a lot of economic sense. I had a meeting with the Prime Minister of Niger Republic trying to say we will stop at Jiba, but if we stop at Jiba what noise will we make?

“The reason we did not stop at Jiba is that, it just goes 20km into Niger, in 20-25kms you get to Maraji. How much is 20km of rail? Maybe 100 millions dollars?” the minister questioned.

“The implication of money coming from not just Niger but any of those land lock countries using our rail line is that our businesses will thrive both in Kano and Abuja and we will create jobs. Imagine how many persons will use our seaports, imagine how many taxes they will pay and other businesses they will do while in the country.”

“Second reason is a more political one. That is our contribution to ECOWAS decision which was reached by Heads of States.

The Minister added, that, Nigeria is competing favourably with Ghana, Benin-Republic and Togo. “They do not wan to use our seaports because in transporting goods from say Niger-Republic to Apapa seaports, they will confront police checkpoints, community checkpoints, immigration checkpoints, they say they encounter criminals so the cost of doing business in Nigeria is far more expensive than in Benin Republic, Togo or Ghana”.

“So what we have done for them is to provide for them a cheaper means of doing business compared to other countries. Because the moment your cargo enters into our track, it is straight to Lagos and all you do is receive it in Lagos and the seaports.”