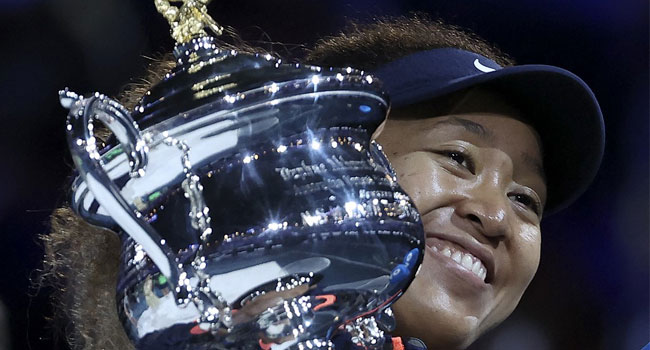 Third seed Osaka preserves her 100 percent record in Grand Slam finals after winning the 2018 and 2020 US Opens and the 2019 title in Melbourne.

The reigning US Open champion, who beat her idol, Serena Williams, in the Melbourne semi-finals, has now won two of the last three Grand Slams as her status and reputation soars.

“We played in the semis of the US Open a couple of months ago and I told everyone that you’re going to be a problem,” Osaka told Brady at the trophy presentation.

“And I was right. It’s really incredible to me to see your growth over the past few months, it’s really cool for me to see.”

Osaka, 23, is only the third player after Monica Seles and Roger Federer to win their first four major finals, and will now rise to second in the world rankings.

She saved two match points in the fourth round against Garbine Muguruza and swept past Williams in straight sets in the semis.

On Saturday, Osaka wore down fellow big-hitter Brady, and then lifted her racquet above her head in celebration of her win as the crowd roared.

After sealing back-to-back Slam titles twice, Osaka has won half the majors she’s contested since beating Williams to win her first in 2018.

“Thank you for coming and watching, it feels really incredible for me,” she told the crowd, which was capped at half-capacity over coronavirus concerns.

“I didn’t play my last Grand Slam with fans so just to have this energy really means a lot.”

Related Topics:sportsJapanJapan’s Naomi Osaka
Up Next