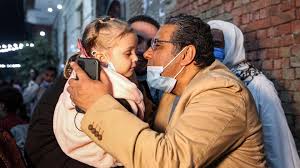 Mr Hussein, an Egypt national held under preventive detention since December 2016, was released from jail on Saturday, Al Jazeera reported.

His release is coming days after Egypt, part of a bloc with gulf countries, reconciled with Qatar following years of a diplomatic rift.

In January, Saudi Arabia, the United Arab Emirates, Bahrain and Egypt agreed in the gulf summit to restore diplomatic, trade and travel ties with Qatar. One of the demands of the Saudi coalition was for Qatar to shut down Aljazeera. Qatar rejected all the conditions.

Mr Hussein, 54, had been detained over a year before the Qatar blockade on allegations of ‘spreading false information’ and affiliation with the banned group, Muslim Brotherhood. He was never formally charged to court.

According to Al Jazeera, Egypt’s ministry of interior publicly accused him of “disseminating false news and receiving monetary funds from foreign authorities in order to defame the state’s reputation.”

While welcoming the news of his release, Mostefa Souag, acting director-general of the TV network, said “No journalist should ever be subjected to what Mahmoud has suffered for the past four years for merely carrying out his profession.”

“While he was incarcerated, Mahmoud had become a symbol of press freedom across the globe,” he added

“On the day of his release, Al Jazeera calls for the freedom for all journalists who are unjustly imprisoned all around the world.

Biden to sanction Nigeria, other countries over oppressive LGBTQ rights