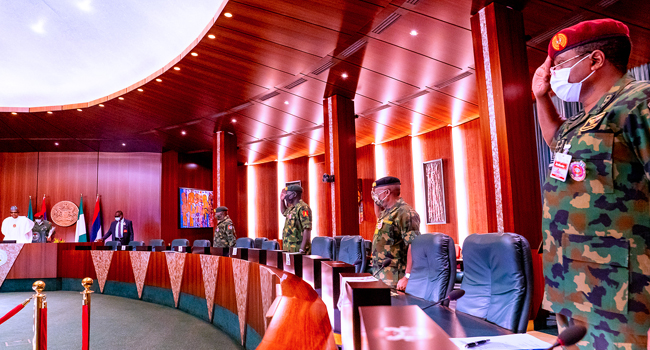 In a letter to the senate on Thursday, Buhari wrote: “In accordance with section 171 (1), (2) (c) & sub-section (4) of 1999 Constitution of the Federal Republic of Nigeria as amended, I have the honour to forward for confirmation by the Senate, the under-listed five (5) names of nominees as Non-Career Ambassadors-Designate.”

Buhari urged the senate to give “expeditious consideration” to the nominations.

President Muhammadu Buhari had last week, appointed new service chiefs. The appointment was sequel to the resignation of the Chief of Defence Staff and service chiefs.

The statement said President Buhari congratulated the new Service Chiefs, and urged them to be loyal and dedicated in the discharge of their responsibilities.

The statement said Buhari accepted the immediate resignation of the Service Chiefs, and their retirement from service.

The statement the President thanked the outgoing Service Chiefs for what he called their “overwhelming achievements in our efforts at bringing enduring peace to our dear country,” and wished them well in their future endeavours.

There had been calls for the removal of the service chiefs following the worsening security situation in the country.