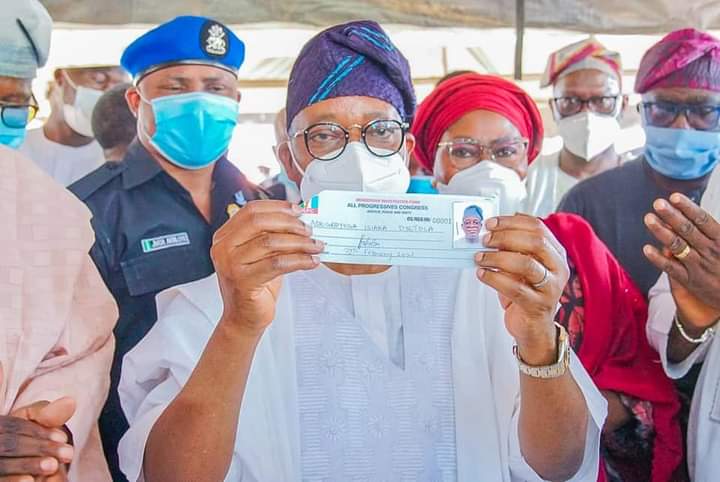 All Progressives Congress (APC), chieftain, Chief Bisi Akande, has rejected the present membership registration and revalidation in the party, describing the exercise as ”an indefensible aberration leading to certain ugly perceptions.”

The former party chairman also berated the Caretaker Executive Committee, describing it as an abnormality.

Akande spoke when members of the Registration and Revalidation Committee posted to Osun State visited him at his Ila-Orangun country home.

He said that no population census is repeated within less than a decade, saying that voters are not re-registered at every election.

Akande observed that, even, the population census is not repeated within less than a decade, stressing that voters are also not registered at every election.

He said: “Within this context, I see the present APC membership registration within less than a decade after the original register as an indefensible aberration leading to certain ugly perceptions.

“The first major perception is that APC, already having a well-computerised register for an average of 100 leaders of similar ideological orientation per each of more than 120,000 polling units across Nigeria, might be lacking comprehension and matric of the modern-day technology.

“The second major perception is that APC leadership might be wasteful and unappreciative of the proper use of money in kind of scanty economy in which Nigeria finds itself.

“These seeming ugly perceptions put into abeyance the applause of the two national election successes that the original APC register enjoyed since its completion on 15th February 2014 and the over one billion naira of 2014’s value that the original register cost when APC had no money of its own.”

Akande said the greatest test that will confront the ruling party is the 2023 presidential election.

He said: “I want to emphasise and warn that the next national election that would elect a successor to President Muhammadu Buhari is going to be the most important test of the on-going APC membership registrations and whatever structure being envisaged to be imposed on it.

“It is my advice and prayer, therefore, that every sense of responsibility should be selflessly employed to make these efforts ultimately result in success for our APC.”

Akande urged that the present APC Caretaker Executive Committee to resist all temptations of “sit-tight syndromes” which according to him, usually characterized “most handpicked authorities in most underdeveloped countries of the world.”

Related Topics:APCBisi Akande
Up Next

APC has no plans for Goodluck Jonathan in 2023 – Buni