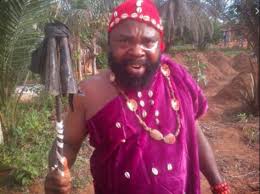 Nollywood actor, Chukwuemeka Ani has released a video from the hospital bed, appealing to Nigerians to help assist his medical bills.

Ani is down with Chronic sore of the anus and diabetes and has been receiving treatment at Dr. Lugard Hospital in Owerri, Imo state,

In the call for help, Ani who lay weak in the bed said he had been bedridden since December 7 and had a surgery done.

He lamented that he is burdened by the expenses and can no longer affect the N2,8 million that has been put as the cost of his treatment.

He thanked people who had helped him thus far and those who have shown willingness to help him.

Ani is famed for playing traditional roles in Nollywood movies.

Ani said: I’ve been in this hospital since 7th of December, for a major surgery and at the end of the surgery it expanded to a very dangerous one.

“I’m soliciting help from my people, my members, my friends, well-wishers, and those that love me so much”.

Ani added that: “The bill is too much, I cannot carry it alone. Your contribution will go a long way to pay for the bill. I’m still taking medication in the hospital.

The romantic relationship between BBNaija housemates, Kiddwayya & Erica is over – here’s what we know