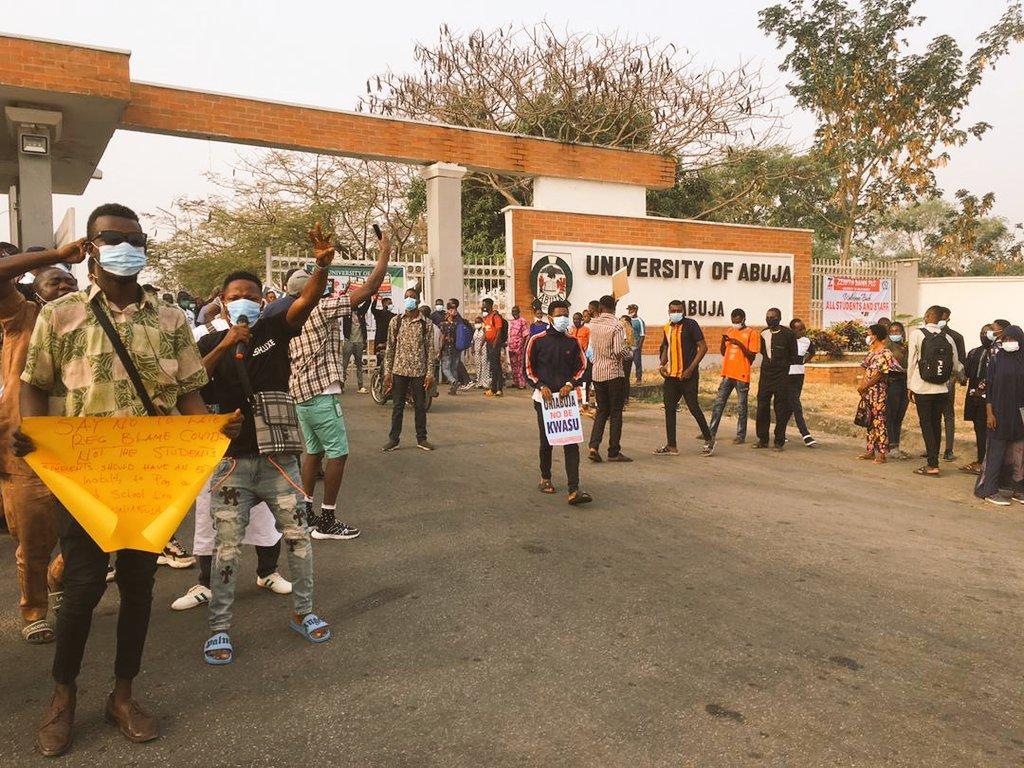 The Management of the University of Abuja has appealed to all law-abiding students to not partake in disrupting the 2019/2020 Academic Calendar, saying it was putting all necessary measures in place to address issues raised by its students regarding their academic programmes.

The appeal came on the heels of protest by its students on Monday over alleged injustice to them by its authorities.

The University of Abuja said: “This morning, Monday 1st February 2021, at 7:30 am, some students blocked the Main Gate of the University, preventing other students and staff from gaining access into the campus.

“The students said they were demanding the reopening and extension of school fees payment portal, cancellation of the late registration fee, and postponement of exams till 8th of March 2021.

“The University Management states that following the release of 2019/2020 Academic Calendar by the Senate of the University, the registration of students was to be done in four weeks.

“Following the expiration of this process, the University closed the portal in February 2020 in line with the 2019/2020 Academic Calendar.

“Yet after pleas from the students’ union, the Vice-Chancellor, in his magnanimity, twice directed the reopening, at different times, of the portal to accommodate those who didn’t register on time.

“In the last one week, a couple of meetings were held with the students’ union which again demanded the re-opening of the portal.  The University administration held an emergency meeting with the union at 2.00 pm on Sunday 31st January 2021 and considered their appeal.

“The University Management, is, however, surprised that while so many of our students were excited to be resuming to campus today after ten months at home,  they were held back by some elements among students who are protesting the same issue that had already been addressed by the University.

“The University appeals to all law-abiding students to not partake in disrupting the 2019/2020 Academic Calendar, considering the amount of time lost to the strike by the Academic Staff Union of Universities (ASUU), and Covid-19 pandemic; and that it is putting all necessary measures in place to address this unfortunate development. ”

The students had barricaded the entrance to the university’s permanent site, demanding the opening of the school’s portal, review of the school’s fees as well as allowing students to pay their fees without the imposition of the deadline.

Oladeji Adebolawale, President, Students Union Government, SUG, of the institution, who led the protest explained that “We are here this morning to show our displeasure through a peaceful protest with no violence. For the past four hours that we have been here, there is no form of violence.

“We have our demands, which are reopening of the school portal till the end of the session, no student should be coerced to write to anybody in the school before he or she is allowed to pay school fees and other demands. If these demands are accented to, we will be okay.

Related Topics:Abuja University
Up Next

Federal Government to meet with SSANU, NASU on Tuesday