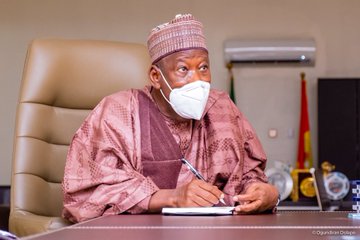 Kano State Governor, Abdullahi Ganduje, has called for the enactment of a law that will abolish the movement of herdsmen from the Northern part of the country to other parts.

He said until this was done, the incessant herdsmen-farmers clashes might continue.

Ganduje made his position known in an interview with journalists on Saturday after a lunch that state governors elected on the platform of the ruling Al? Progressives Congress had with the President, Muhammadu Buhari, in Daura, Katsina State.

The governor’s suggestion came at a time there is heightened tension in some South-West states, especially Ondo and Oyo, over quit notices issued to herdsmen.

He said the ban would also stop the problem of cattle rustling.

He said the call became necessary because the governors know the security needs of the people and the various black spots in their states.

Gombe State Governor, Inuwa Yahaya, on his part asked the new service chiefs to work very hard to live up to expectations.

“I will ask them to work hard; harder than what Mr. President might have assumed they would do because the task ahead is very challenging and I believe they will live up to expectations,” he said.

He also called for prayers, saying the country needs prayers.

“I think they have to listen to people in the transfer of intelligence and continue to ask people to pray for them,” the governor said.