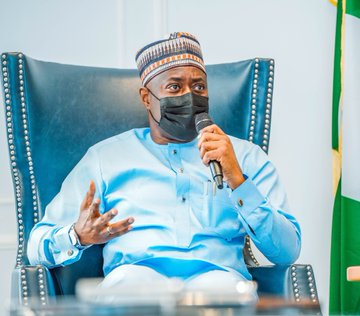 Oyo State Governor, Seyi Makinde will on Sunday meet with the Inspector-General of Police, Muhammad Adamu and traditional leaders to discuss how to restore peace in the state.

This was disclosed by the Deputy Chairman, Oyo State Council of Obas, Oba Francis Alao in an interview on Saturday.

Also confirmed that Makinde would be represented by a team of the state government while a team from the office of the IGP would also stand in for Adamu but the Commissioner of Police in the state, Ngozi Onadeko, would be present at the meeting.

He said, “I am going there tomorrow (today) to hold a meeting with all the traditional rulers in Ibarapa land. The Commissioner of Police in Oyo State too will be there. A team from the Inspector-General of Police Office will also be there. The state government (representatives) will also be there.

“All we want to do is to ensure there is peace in the area for everybody to coexist peacefully. I am going in my position as the Deputy Chairman, Oyo State Obas Council. We have told all traditional rulers from the three local government areas in Ibarapa land to be there.

“There is an ongoing reconciliatory effort at Tede, Ago Are and Ago Amodu in the Atisbo Local Government Area. I am coordinating that and everybody should sue for peace. Everybody should eschew violence and embrace peace while the security agents will do their investigation.”

The Asigangan of Igangan, Oba Lasisi Adeoye, also confirmed to our correspondent in Ibadan that he and traditional rulers from Ibarapaland would be part of the meeting,

He said, “All the Obas in Ibarapa will hold a meeting here in Igangan tomorrow (today) and the Olugbon will be here for the meeting.”

Sources said the government delegation would visit the troubled spots to assess the extent of the damage.

“The delegation will also engage the youth to calm frayed nerves and ensure that peace is restored to the troubled areas,” a source told Sunday PUNCH.

The call for this meeting is off the heels of the unrest that has happened in Oyo State after a youth leader and influencer, Sunday Adeyemo better known as Sunday Igboho on Friday ordered a quit notice to Fulanis residing in Igangan, Ibarapa area of the state.

Adeyemo who spoke in Yoruba dialect said that Yoruba people are concerned that their fatherland is about to be taken from them by the Fulanis who had been granted access to stay and graze on the lands.

The quit notice had generated tension in parts of the state, prompting Seyi Makinde, the governor, to ask the IGP to arrest those fomenting trouble under the guise of protecting the interest of Yoruba people.

“For people stoking ethnic tension, they are criminals and once you get them, they should be arrested and treated like common criminals,” the governor had told the police commissioner.

Also, Mohammed Adamu, inspector-general of police (IGP) on Saturday ordered the arrest of Sunday Igboho over the quit notice he issued to the herdsmen.