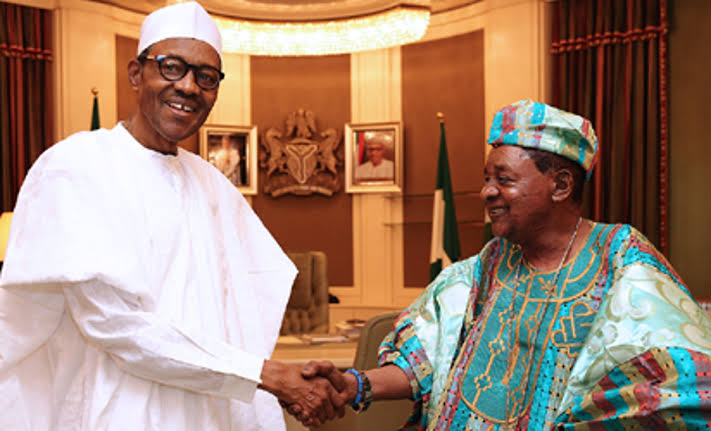 Alaafin of Oyo, Oba Lamidi Adeyemi, has written to President Muhammadu Buhari about the growing feeling of frustration, disappointment and despondency among Yoruba people caused by the activities of Fulani herdsmen, bandits and kidnappers, which, if not immediately addressed, could lead to other serious national catastrophes and security challenges.

The monarch, in an open letter to Buhari, lamented the security situation in the country, especially in the South West geo-political zone, as well as Yoruba-speaking areas of Kwara, Kogi and Edo states. He blamed the situation on incessant menace of Fulani herdsmen who have laid siege to almost all highways in Yoruba land.

The monarch alleged perpetration of all forms of assault on Yoruba people, including raping of the women, and in some occasions, in the presence of their husbands.

“That is apart from massive destruction of our agricultural lands, which ultimately points to imminent starvation. On top of it all is the menace of professional kidnappers usually in military uniforms. What is more worrisome about the kidnapping notoriety is what looks like impunity with which these kidnappers enjoy their nefarious activities.”

Alaafin said Yoruba leaders were worried by the audacity of the herdsmen, kidnappers and bandits to perpetrate their illegal acts in broad daylight on the usually busy highways without any security agency being able to do anything.

“Worse still is the confidence with which they demand ransoms and collect such illegal levies at designated spots without any security personnel being able to lay siege to such spots as was the practice in the recent past.

“Now, we cannot even talk of parading suspects when in actual sense, no major arrests have been made in this part of the country. Without arrests, we cannot talk of the criminals facing the law.”

According to Alaafin, “it is in the wake of this manifest frustration of our people that they have found it unavoidable, even though reluctantly, to resort to alternative measures to safeguard life and property. In most part of Yoruba land, their pre-colonial military structures have not totally collapsed, hence, such structures like Odua Peoples Congress (OPC), Agbekoyas and other vigilance groups.”

The monarch noted: “When these nefarious activities were first noticed in Oyo/Oke Ogun area of Oyo State, I took proactive steps to stem the tide and to amicably normalise relations between farmers and herders. Our initiative succeeded because we were dealing with genuine farmers and herders who had a commitment to Nigeria and who were interested in promoting their economic activities in a peaceful, prosperous and united Nigeria.

“However, it is becoming obvious that the nature and character of banditry and kidnapping today are different from what they used to be. Today, it is not merely an infraction in the course of doing business, but blatant and criminal violation of the constitutional right to life and liberty of innocent citizens of Yoruba land.”

There is a general impression among opposition group that you are not known to take decisive and proactive steps in many matters of national interest and that you are not usually too disturbed about the gale of insecurity in Yoruba land.

May I also share with you the outcome or product of my wide consultations in Yoruba land to let you know, beyond what official security reports will make available to you, that there is a growing feeling of frustration, disappointment and despondency among our people, which if not immediately addressed, could lead to other serious national catastrophes and security challenges.

I recall with sadness that the Old Oyo Empire disintegrated because the slave trade introduced insecurity that made all other economic activities which had supported and enhanced the prosperity of Oyo to decline. It is never my wish that any part of Nigeria will ever go through this harrowing experience again.

Apart from massive destruction of farms and crops planted on them, the new wave of Fulani, pretending and disguising as herders have unleashed a reign of terror on Yoruba land.

They destroy crops, they kidnap men and women, violate and rape our women, right in the presence of their husbands. What this portends id definitely more than the simplistic interpretation of farmer/herder clash but the deliberate acts of hostility and criminality.

What makes it worrisome is the fact that for reasons best known to the Police establishment, they have not been apprehending or pretend to be in the defence of victims.

There is always a tendency to blame the victims and demonstrate helplessness in apprehending and bringing perpetrators to book to face the full wrath of the law.

It is even said, Mr President that these criminal pseudo herders go about their nefarious activities in broad daylight and many times in military uniform. They carry sophisticated weapons, the likes of which are only available to state actors.

There seems to be no doubt that the security apparatus of the country is both overstretched and rustic.

The philosophy of policing the State, protecting life and property and ensuring the existence of atmosphere that is conducive to life and living in Nigeria is lost on the security personnel. In Yoruba land, we are scared and worried about the outrageous audacity and effrontery of these criminal elements in carrying out their activities and without any challenge by security operatives.

In situation where money exchanged hands, the Police are adequately equipped to trace every paper money issued by the Central Bank of Nigeria. Intelligence gathering concerning money paid as ransom should lead, finally to these criminals since they would eventually make transactions with the proceeds of their illicit and criminal activities.

As no major arrest of Fulani pseudo herdsmen has been made till date in Yoruba land, suspects cannot be paraded, let alone arraigned.

Even threatened a sitting traditional ruler and asked him to comply with certain directives go about as if they are indeed above the law and beyond arrest. It is unheard of that the State could be seemingly helpless in the face of these criminal assaults on its integrity and capacity to carry out the most sacred of its mandate; preserving life and property.

Mr President, let me assure you that the Yoruba people traditionally have what it takes to defend themselves and interests against all enemy attacks. What is of immediate concern is the possibility of these traditional self-help mechanisms of defence to conflict with legal and constitutional framework of the security organizations.

This is indeed my greatest fear, recluse the situation is fast degenerating into what could trigger complete breakdown of law and order under a constitutional state arrangement. Thus latent frustration must be nipped in the bud to avert a breakdown of the state system in Yoruba land.

I am aware that members of the Odua People’s Congress scattered all over the world are already being mobilized to stand in the defence of their land and are ready, willing and able to raise an army of volunteers as was done in 1968 by the Agbekoya.

It is trite saying that a stitch in time saves nine. For me, and relying on ancient wisdom, the dilemma of a possible breakdown of state authority and power could still be managed and the slide to anarchy arrested.

Historically, and even now, ethnic relations between the Yoruba and the Fulani had been managed adroitly through excellent statesmanship and participatory administration of inter-ethnic group relations. I have had many instances of settling farmer/herder disagreements in my Palace to the extent of instituting workable modalities for inter communal conflict management and peace building.

What is strange is the new wave of criminally minded Fulani groups. What is again disappointing is the ease with which these criminals will leave our country should there be anarchy in the land.

They have other places to return to, but Nigerians don’t have another country apart from here.

This is a serious national emergency, when Fulani herdsmen are engaged in criminality all over the country and the sitting federal government seems helpless and generally unperturbed by what is going on in the security organizations. There is no doubt that some leaders of these security organizations are either incompetent or bankrupt of ideas. Some are even compromised to take any decisive actions against criminals.

Oba Adeyemi said in the face of the apparent helplessness of the security agencies, President Buhari should answer the question on the lips of most Nigerians: where do we go from here?

Related Topics:Alaafin of Oyo
Up Next

EndSARS: Police apologize for the excesses of officers during protests