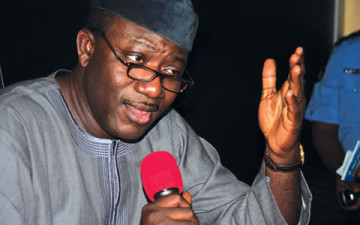 A former Deputy Speaker of Ekiti State House of Assembly and incumbent Caretaker Zonal Publicity Secretary of the All Progressives Congress (APC) in South-West, Hon Karounwi Oladapo has thrown his weight behind a Fayemi presidency.

The All Progressives Congress is said to have a gentleman to zone the presidency to the South in 2023.

In an interview with Vanguard Newspaper published on Sunday the spokesperson said Kayode Fayemi, the Ekiti State government is the most qualified candidate in the South-West region based on age, performance, acceptance in other regions and unifying role as the Chairman of the Governorship Forum.

He said APC’s National leader, Ahmed Tinubu and Vice President Yemi Osinbajo are disqualified because of their age,

“First and foremost, I have written severally that anybody above seventy years of age is not fit for Nigeria presidency anymore. The current President, Muhammadu Buhari, was voted into office because of the confidence Nigerians has in him due to his integrity built over the years but on account of age he is not there.

“Our national leader, highly respected Senator Ahmed Tinubu, I love him because he has paid his due but the fact remains that by 2023 he will be above 70 years of age. I cannot in all good conscience support that even if my father or my mother is contesting for President and they are above 70 by 2023 I will not support them. Dr Kayode Fayemi that I am advocating for is 55 years of age, a senior youth within the bracket of the ‘sorosoke’ generation’s request, that is number one.”

Oladapo added that Fayemi would be the choice of an under-represented Ekiti State in the South-West. And if Fayemi will not contest, he will contest in the primaries.

Oladapo continued that Fayemi’s invitation to speak at the Arewa House was an indication that Fayemi was accepted in the North and that brightens the chance of a Fayemi presidency.

He cited a speech of Kaduna State governor declaring Fayemi as “our adopted son”.

“Don’t forget that a couple of weeks ago he was invited into the Arewa House. When I was in secondary school, I was hearing of Kaduna Mafia and when I grew up I understand that the mafia is made up of political influencers.

“And opinion molders of the North and this group of political and opinion molders gathered together and, before the whole world, one of the intellectuals from the North, Mallam El Rufai, said “we invited Fayemi here today to come and be a guest speaker, it is not by accident but the reason we invited him to be with us will be unfolded as things unfold and the Sardauna of Sokoto said Kayode Fayemi is our adopted son.”