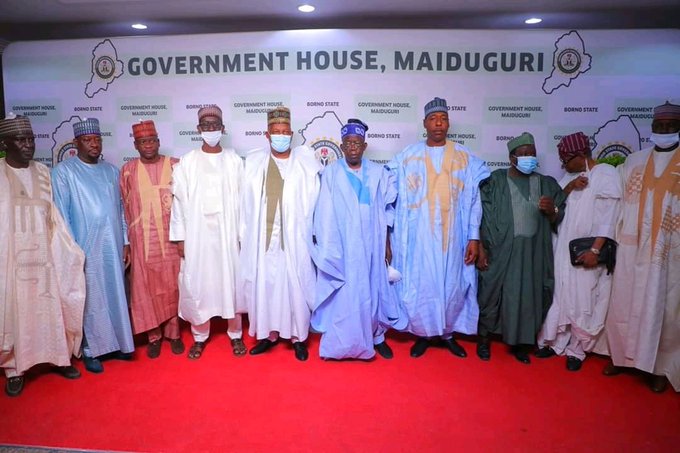 A former governor of Lagos State and chieftain of the governing All Progressives Congress (APC), Bola Tinubu, has bemoaned the incessant killings across the country, stressing that Nigeria can no longer condone the carnage.

Mr Tinubu visited Maiduguri, Borno State capital, to sympathise with the government and people of the state over the recent mass killing of farmers in a rice field.

At least 48 farmers have been officially confirmed by the government to have been slaughtered two weeks ago in Zabarmari district of Borno. Unofficial sources have placed the death toll to about a hundred.

Speaking to journalists at the Government House, Maiduguri, Mr Tinubu said peace and progress cannot be achieved in an environment where lives are being threatened recklessly.

“We cannot achieve peace and stability in an environment where people are butchered while in search of their means of livelihoods,” said Mr Tinubu.

The APC leader who had earlier paid a courtesy call on the governor of Borno State, said he was in the state to “sympathise and condole with the people of Borno, particularly the governor who has been working tirelessly to ensure peace and stability in the state.”

“And even as a nation, we want peace in this country. We cannot achieve peace and stability in an environment where people are butchered while in search of their means of livelihoods.

“And those who may be promoting all of these dissidents are called upon to try the other means of peace.

“Let’s get our youths engaged, we cannot afford any of this carnage any longer.

In what seems like a Presidential campaign move, Politicians loyal to Bola Tinubu, a national leader of the All Progressives Congress (APC), visited Lamidi Adeyemi, the Alaafin of Oyo, on Monday.

Led by Dayo Adeyeye, a former minister of state for works, the group said they were at the palace to seek support for the 2023 presidential ambition of Tinubu.

Soji Akanni, a former senator from Oyo state; Rotimi Makinde, a former member of the house of representatives; Oyetunde Ojo, an in-law of Bola Tinubu, were in the delegation that also visited the palace of Saliu Adetunji, the Olubadan of Ibadan.

While addressing the monarchs at their palaces, Adeyeye said Tinubu has the capacity to succeed President Muhammadu Buhari.

He said since the rotational policy of the APC favours the south, Yorubas should support Tinubu.

Adeyeye said Tinubu was not aware of the group’s effort, stating that the coalition was formed to represent the Yoruba agenda.

“Our mission is political. Politics has started and everyone is scrambling. We, the Yoruba people, see it as our turn because it is the agreement that presidency would be rotational,” he said.

“We have both written and unwritten contracts. After President Muhammadu Buhari’s eight years, it is the turn of the Yoruba.

“In the south, we have south-east, south-south and south-west. We have a joker in the south-west and the joker is Asiwaju Bola Tinubu, who was part of the struggle for democracy. There are fundamentals of governance and we want someone who is versed in politics to go into the race. We see that Asiwaju Tinubu has the clout and he is qualified. As experienced politicians, we see that Tinubu is qualified.”

While responding, Alaafin said he believed in the group’s mission while lamenting that Nigeria political landscape is insincere.

“In Yoruba land, covenant is very important. We believe that with law of retributive justice, if you break covenant the repercussion is great. You may think the race for 2023 is too early but it is never too early to start,” he said.

Buhari should leave his cows for once – Oby Ezekwesili

‘Governor Wike is not plotting to destabilise APC’ Commissioner says