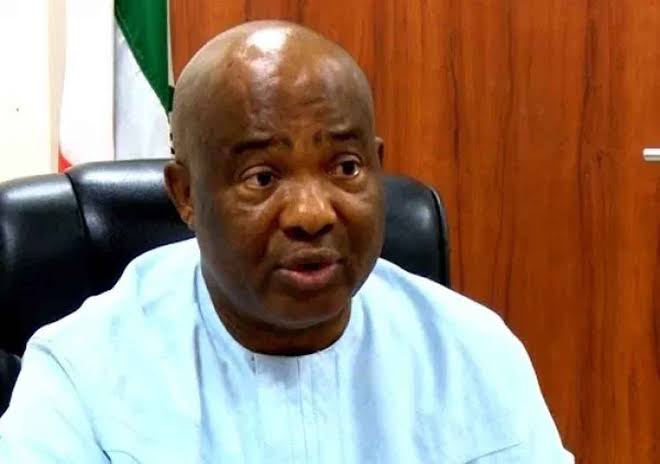 Governor of Imo State,  Hope Uzodinma has advised leaders of the South-East to join the ruling party, All Progressives Congress, APC if they want to develop their region.

He spoke while speaking with reporters after having a meeting with President Muhammadu Buhari at the Presidential Villa on Friday.

Uzodinma advised that being in the opposition affects proximity to power and solving the problems in one’s region.

“There is no gainsaying that if you are not with the national party, and you choose to be in opposition, of course, you will continue to fast until God answers your prayers. But we that are in the ruling, of course, what it will take us to solve certain problems may be different from what it will take somebody who is not very close to the source of authority to solve his own problems.

“There is no way you can compare what your people will get in an opposition party to what they will get from the ruling party. APC is the ruling party which has access to the federal government.

“I’m very optimistic that gradually, we will get there. It’s a matter of convincing our people, which we are doing,” he added.

When asked about the defection of Ebonyi State Governor, David Umahi to the APC, Uzodinma clarified that Umahi is not joining the APC to become a President. He said Umahi  joined the APC to add value to the party and his state.

“So, I know that my brother Umahi is politically strong in the South East and joining APC would add to the value of the party in my region. But he never told me he is coming because he will be President. “So, I want these people who want to cause confusion and create bad name for Umahi to run away from that point and then encourage our people who have decided to align with the ruling party.”

“What we are doing in the South East as a party is carrying the message of the party. Before this time, some of us believe that we should have marketed the ideologies and policies better than the past leadership did.

“What we are trying to do is to explain to our people the need to see that this Nigerian project belongs to all of us and if you jump out of the train, don’t accuse anybody of pushing you out of the train. It is not about whether you want to be president now or not. You don’t get presidential ticket by the market square. It is the decision of the political party. You must be loyal to your political party.

“So, I know that my brother Umahi is politically strong in the South East and joining APC would add to the value of the party in my region. But he never told me he is coming because he will be President. So, I want these people who want to cause confusion and create bad name for Umahi to run away from that point and then encourage our people who have decided to align with the ruling party.

The Imo State Governor pleaded with the other South-East Governors to join the APC so they can have a strong stake in the party and Nigeria.

“If you check very well, before 1999, in the first republic, we had Northern Progressives Congress (NPC) going into alliance with National Council of Northern Cameroun (NCNC) for government to be formed. Zik became president though ceremonial and then NPC produced the prime minister. Even in the second republic, for proper democracy to be marketed, we went into an alliance with National Party of Nigeria (NPN).

“In that alliance, the South East produced the Vice President in the person of Chief Alex Ekweume and Ume Ezeoke as Speaker of the House of Representatives. So, we were better.

“The meaning of power is proximity to the source of authority. Once you have access, every ethnic zone wants to come close to the centre. Even if you are not the head, you can be the neck or shoulder .We want to be part of that body called Nigeria and that way, we will move in a very united manner. If Umahi did not come, I told you after I won my election that part of my job is that I will deploy political evangelism and convince my people to join our party because our programmes are very bright.

“So, now we are gradually making a success. Today, it is Ebonyi, who knows who it will be next? My hope and prayer is that before the end of this year, two more governors will join APC. God helps us and it works. I am home and dry.”

There has been allegations that with the recent one-sided defection, Nigeria may be headed for a one-party system where the APC is the only significant party. Uzodinma dismissed that this may happen.

He then praised the party for its wonderful social interventions and its success in providing basic amenities and jobs.

He said, “On APC heading to one party state – I don’t think so, if you recall our history from 1999 till date, you will agree with me that at a time PDP had 28 states and they were still looking to remove the very few states of the other parties. Now, how many states do we have as APC? And the whole thing about politics is like evangelism. Every serious political party must have an expansionist mentality to expand their membership.

“I think we will continue to encourage our people because the whole idea is that once the ideology is right, the system is working, nobody wants to go to a war that he will lose. So, you join those who are winning. I think Nigerians overtime have bought into the ideals of the founders of APC, manifesto of the party and given the achievements of the party despite the crisis globally, despite the security issues, you can see that Nigeria is still surviving.

“I was watching on the TV, go to India and see the quantum of protests going on, all over the world protests. But the EndSARS protest that was like the end of Nigeria, you can see how God has helped us to come out of it. We have a beautiful country and the government in power, we have a president who is very humble and who has a target and he is going to his target irrespective of what people are saying. He doesn’t believe we should waste our resources over frivolous matters and issues and never in the history of this country and I can bet on it that any president or government created the number of social interventions programs that this government has done.

“As I speak to you, little kids are being fed in schools, social programs of empowerment, 1000 jobs per each of the 774 Local Government Areas (LGAs). The anchors borrowers programme and we should celebrate our success. People have not seen that this government has almost achieved food security, where everything we eat now are produced in Nigeria. Unlike before when we had to queue and wait for rice imported from Europe and Asia. Now, the borders are closed. A bag of rice would have reached N100,000 but the price has been between 22,000 thousand . So, I think what we need to do as a country is change of attitude and where we have done well acknowledge we have done well.

“I think if it’s possible for all of us to belong to the APC since the APC as I speak to you now has the best political manifesto, programmes and government in power, I see nothing wrong in all of us joining APC based on conviction not that you are coerced into joining APC. But if you voluntarily come into APC, our dream is to have every citizen of Nigeria becomes a member of our party because we have to be ambitious.”