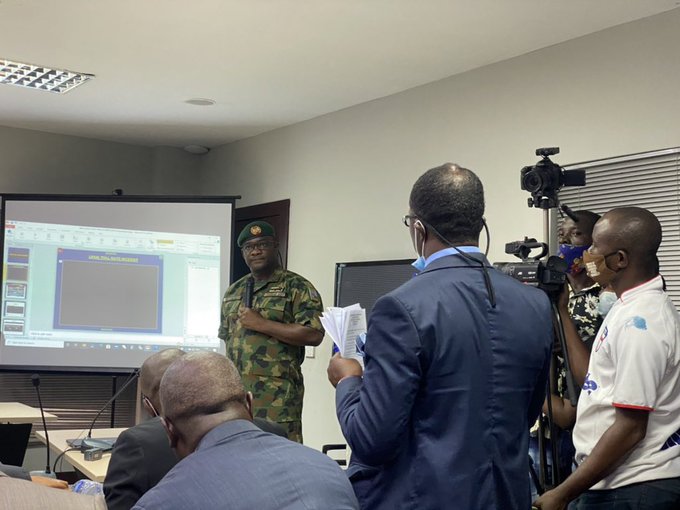 The Nigerian Army has said that it will repeat same action it took at the Lekki Toll Gate anywhere in the country if such a situation arises again.

A representative of the army, Brigadier General Ahmed Taiwo, stated this on Saturday when he appeared before the Judicial Panel of Inquiry set up by the Lagos State government to look into the allegations of brutality by the disbanded Special Anti-Robbery Squad (SARS) and other issues raised by the Nigerian youths.

Ibrahim Taiwo, Commander of 81 Division of the Nigerian Army, promised a repeat of same actions while testifying before the judicial panel the Lagos State Government set up to probe the incident.

On the night of 20 October, 2020, at about 6:50pm, operatives of the Nigerian Army opened fire on peaceful# EndSARS protesters at the toll gate, killing an unconfirmed number of people.

Despite evidence of people being killed and injured at the Lekki incident, the army had maintained that blank bullets were used on protesters.

While being cross examined by Olumide Fusika, a Senior Advocate of Nigeria (SAN), Taiwo said given the same circumstance, the army would act in a similar way to that of October 20, 2020.

He insisted that there was no shooting of live ammunition at protesters.

On the night of 20 October 2020, at about 6:50 p.m, members of the Nigerian Army opened fire on peaceful End SARS protesters at the Lekki toll gate in Lagos State, Nigeria.

Nigerian authorities continue to deny that the shooting happened.

In a video , She said at least 15 people were killed in the shootings and that she and other survivors took the victims’ bodies to the soldiers who took them away

She said that armed soldiers and police officers shot at her and other peaceful #EndSARS protesters at the Lekki toll gate on the night of 20 October. Among them were officers of the disbanded SARS.